The peso closed the session with an appreciation of 019% or 4.2 cents, trading around 22.36 pesos per dollar.

In the session, the Global Risk Perception Base Indicator (PPI) stood at -140 units, indicating that there was an appetite for medium risk, contributing to the advance of the peso against the dollar.

It should be noted that the exchange rate traded most of the time with low volatility in a channel between 22.30 and 22.36 pesos per dollar, a sign that the market is waiting for the Banco de México monetary policy announcement scheduled for tomorrow at 1:00 pm, where an interest rate cut of 50 basis points to 4.50 percent is anticipated.

In the commodities market, oil prices closed higher, as a result of the publication of the weekly report of the Energy Information Administration in the United States.

The report observed that, in the week of August 7, crude inventories in that country contracted 4.51 million barrels (m bbl), bringing total commercial inventories to a level of 514.1m bbl.

This is the third week in a row that commercial inventories are down.

The peso and employment

Regarding economic indicators, in Mexico the number of IMSS insured as of July was released, showing a monthly reduction of 3,907 places, being the first job destruction for the same month since 2005.

Between January and July, a loss of 925,490 places accumulated, representing the largest decrease in insured persons for the same registration period. 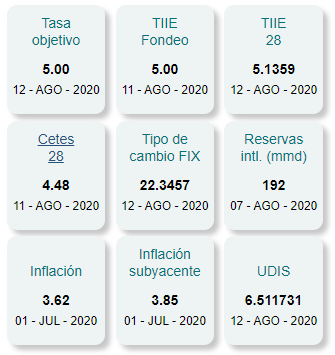 From March to July, 1 million 117,584 formal jobs that are directly related to the health crisis due to the Covid pandemic have been destroyed19. Going forward, job destruction is likely to continue as a domino effect of the economic crisis on other industries is expected.

In the session, the peso-dollar reached a minimum of 22.2670 and a maximum of 22.4930 pesos per dollar in the interbank quotes for sale.