The peso starts the session with a significant depreciation of 1.65% or 34.8 cents, trading around 21.48 pesos per dollar, ranking as the second most depreciated currency in the wide basket of main crosses, behind the South African rand, which lost 2.48 percent.

Most currencies lose against the dollar amid a clear return in risk aversion in global financial markets amid fears related to the coronavirus pandemic.

In the United States, 39,844 new cases of coronavirus were reported in the last 24 hours, a figure that is above the average of the last seven days, which suggests that infections are increasing.

“I think we will have at least one more cycle of this virus into the fall and winter,” said Dr. Scott Gottbield of the Food and Drug Administration (FDA).

For its part, in the United Kingdom, new cases of coronavirus are doubling every seven days, so that by October, up to 50 thousand cases a day could be observed if precautions are not taken.

This increases the likelihood that Prime Minister Boris Johnson will announce new containment measures, seeking a balance that slows the pandemic, but prevents a severe drop in economic activity.

The volatility of the markets may also be related to the death of the US Supreme Court Justice Ruth Ginsburg, as there is now uncertainty about how this could impact the presidential elections in November.

Donald Trump said that during the week he will nominate a woman as a successor to Judge Ginsburg, who will fill the post once the elections are over.

Few currencies are gaining ground in the foreign exchange market, with the Japanese yen standing out, advancing 0.46% due to a greater demand for safe-haven currencies.

On the other hand, in the bond market, the yield rate of the 10-year Treasury bonds showed a decline of 3.4 basis points to 0.66%, as a result of a higher demand for risk-free assets.

Finally, in the United States, the futures market points to losses close to 2% during the session.

It should be noted that, in the capital markets of Europe, the losses are concentrated in companies in the financial, energy and industrial sectors, which are considered cyclical, so today’s movement is due to the expectation of a resurgence of the pandemic and the threat of a new impact on global economic activity.

Metals mostly lose more than 1%, including the price of gold that fell 1.03% to $ 1,930.7 per ounce. Although gold is a safe haven asset, the losses are the result of the strengthening dollar this morning.

Regarding economic indicators, today the aggregate demand figures for the second quarter were published in Mexico. According to seasonally adjusted figures, aggregate demand contracted at a quarterly rate of 19.8% and an annual rate of 21.6 percent.

In the breakdown, all the components presented a contraction compared to 1Q 2020, where the greatest effects were in Exports with a fall of 30.5%, Investment of 29.8% and Private Consumption with 19.4%, while Government Consumption fell 1.0 percent. 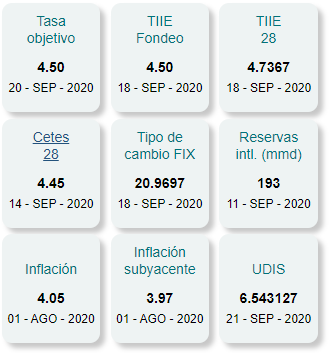 Anticipated figures reveal that the main engine of the recovery for 3Q 2020 will be external demand, since the deterioration of economic fundamentals, the lack of an expansive fiscal policy and uncertainty would continue to affect private and government consumption, as well as in investment.

To hedge against a depreciation of the peso beyond 22 pesos per dollar, a purchase option (call), with an exercise date within 1 month has a premium of 1.45% and represents the right but not the obligation to buy dollars in the aforementioned level.