The appreciation of the peso is the result of a weakening of the US dollar, mainly due to two factors:

Unemployment support claims did not show an improvement over last week.

Initial claims for unemployment benefits for the week ended September 5 stood at 884,000, unchanged from the previous week.

Likewise, the continuous applications for unemployment support, from those people who are already receiving support or continue to wait, increased from 13,292 million to 13,385 million.

The European Central Bank kept the interest rate unchanged, but Christine Lagarde pointed out that there is no reason to overreact to the strengthening of the euro. It should be noted that the euro has appreciated in previous weeks to levels close to 1.20 dollars per euro, which could slow down the process of economic recovery based on exports.

Following Lagarde’s comments, the euro strengthened, showing an appreciation of 0.73% and trading at $ 1.1889 per euro.

In the session, the market could also react based on news about the fiscal stimulus package in the United States. Today the Senate is expected to vote to approve a new Republican proposal.

The initiative is a reduced version of $ 500 billion, which excludes a second round of direct checks and support for state governments. It should be remembered that the Democrats’ proposal is much higher, equivalent to 2.2 trillion dollars.

For the rest of the financial markets, the capital market shows moderate losses in the European session, with average falls close to 0.30%, while in the United States the futures market points to a mixed performance, with moderate gains for issuers in the technology sector, but losses for the S&P 500 and Dow Jones indices.

The performance of the US capital market could be positively influenced if the US Congress succeeds in advancing the approval process of a fiscal stimulus package.

In the raw materials market, performance is also mixed. The WTI starts with a 1.34% decline, trading at $ 37.54 per barrel, in view of the expectation that the EIA data to be published today will show an accumulation of oil inventories in the United States.

Regarding economic indicators, this morning the Survey of International Travelers (EVI) was published in Mexico. The survey showed that 2.8 million visitors entered the country in July, of which 1.4 million were international tourists, while the rest were classified as hikers (1.4 million).

Visitors and tourists registered a monthly increase of 17.7% and 41.7%, respectively. Although it is normal to observe a monthly increase from June to July due to the holiday period, this time it was of greater magnitude due to the fact that it starts from a low base, after tourism was affected in the previous months by the measures of global confinement to contain the pandemic.

However, in annual terms, a severe drop of 66.6% in the entry of international tourists to the country continued. 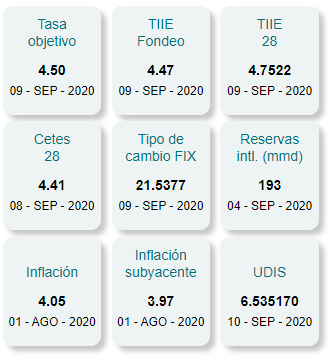 On the other hand, foreign exchange income related to the total expenditure of international visitors amounted to 490.4 million dollars, equivalent to a contraction of 77.4% per year.

To hedge against a depreciation of the peso beyond 22 pesos per dollar, a purchase option (call), with an exercise date within 1 month has a premium of 1.29% and represents the right but not the obligation to buy dollars in the aforementioned level.