The appreciation of the peso at the beginning of the week is the result of a weakening of the US dollar, which fell 0.21% according to the weighted index, given a greater appetite for risk in global financial markets.

The European capital market shows mixed performance with little change in most indices, while in the United States, the futures market shows that earnings could exceed 1% after opening. This optimism is mainly due to three factors:

Orcale Corp. is close to reaching an agreement with ByteDance Ltd. to purchase TikTok’s US operations after Microsoft’s proposal was rejected.

The agreement with Oracle will be more like a corporate restructuring, although the terms are still being discussed. Once an agreement is reached between the companies, it must be approved by the White House.

This could temporarily reduce political tensions between China and the United States.

Over the weekend, AstraZeneca and the University of Oxford resumed clinical trials of their Covid19 vaccine. After the UK Health and Medicines Regulatory Authority recommended resuming the study after doing an independent investigation.

The market is awaiting the monetary policy announcement from the Federal Reserve scheduled for Wednesday, September 16, where the Open Market Operations Committee is expected to maintain accommodative language.

It should be remembered that this time the announcement is accompanied by an update of the growth, inflation, employment expectations and the projection of the committee members on the future of the interest rate.

It should be added that on Wednesday the financial markets will remain closed in Mexico for Independence Day, so an increase in exchange rate volatility could be observed.

During the second half of the month, episodes of risk aversion cannot be ruled out.

Coronavirus cases worldwide exceeded 29 million, with India being the epicenter of the pandemic, where more than 90,000 new cases have been registered for five consecutive days.

In Israel, the committee voted to impose a second lockdown nationwide to try to curb infections.

The ministers decided to strictly limit meetings and economic activity for at least three weeks.

In the session, the publication of relevant economic indicators in Mexico or the United States is not expected.

However, over the weekend the employment figures published by the IMSS were published in Mexico.

In August, the recovery in the number of IMSS insured began, increasing by 92,390 places, after five consecutive months of setbacks.

During those months, between March and July, 1.1 million memberships were destroyed.

The insured for the month amounted to 19.6 million, of which 86.3% are permanent and 13.7% are temporary. It is worth mentioning that IMSS policyholders represent 86% of formal jobs and 41% of the employed population.

Compared to the same month in 2019, the total number of IMSS insured persons showed a contraction of 4.1%, equivalent to 833,668 places.

By federal entity, only 2 of the 32 states registered an annual advance in the number of insured by the IMSS, with Tabasco registering an increase of 2.1% and Baja California of 0.9 percent. 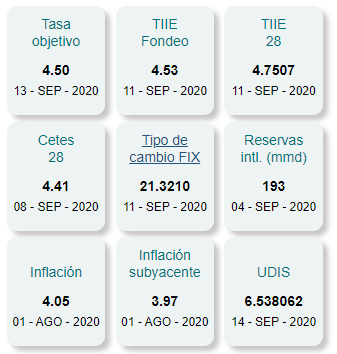 In the accumulated to the seventh month of the year, 833,100 places have been destroyed, representing the largest decrease since there is a record for the same period.

During the session, the exchange rate is expected to trade between 21.15 and 21.40 pesos per dollar. The euro starts the session with an appreciation of 0.24%, trading at 1.1875 dollars per euro, while the pound appreciates 0.52% and trading at 1.2862 dollars per pound.

To hedge against a depreciation of the peso beyond 22 pesos per dollar, a purchase option (call), with an exercise date within 1 month has a premium of 1.14% and represents the right but not the obligation to buy dollars in the aforementioned level.