The peso starts the session with little change compared to yesterday’s close, trading around 20.32 pesos per dollar, touching overnight a minimum of 20.29 and a maximum of 20.43 pesos.

Although the exchange rate remains relatively stable, most currencies in the foreign exchange market lose ground against the dollar, as there is a greater perception of risk associated with the growth in the number of Covid-19 cases globally and increasingly aggressive lockdown measures threatening the fourth quarter economic recovery.

In other markets there are also widespread losses. In the capital market, the main indices in Europe show an average decline of 0.72% and in the United States, the futures market points out that the main indices will start the session with average losses close to 0.17 percent.

Finally, in the commodity market, the prices of oil and other commodities register falls. WTI loses 0.60% and Brent 0.18 percent.

Among industrial metals, aluminum fell 0.18% and copper 0.61%. This is also due to the persistence of uncertainty about the effect of the reappearance of coronavirus cases on economic activity.

The nervousness of the markets likely rose due to two factors:

The leaders of the European Union will meet today in a virtual summit to define the contingency measures that will be maintained during the holiday period.

Also, it is expected that the next stimulus package to boost the European economy will be discussed.

For their part, the University of Oxford and the pharmaceutical company AstraZeneca confirmed that their experimental vaccine against Covid-19 showed a strong immune response in older adults.

The researchers are still awaiting the final results of its last phase, which will show if the level of effectiveness is close to those reported by Pfizer and Moderna.

It is worth mentioning that this morning, the only currency that shows a significant appreciation is the Turkish lira, with an advance of 2.0% and trading at 7.55 liras per dollar, after the Central Bank of Turkey raised its reference rate from 10.25% to 15.0%, committing to combat inflation.

The decision was led by the bank’s newly appointed Governor, Naci Agbal, who was appointed by President Erdogan after firing his predecessor Murat Uysal.

Regarding economic indicators, in the United States the weekly employment report was published, corresponding to the week that ended on November 14.

742 thousand new applications for unemployment support were reported, increasing by 31 thousand units compared to the previous week, being the first increase since the week that ended on October 9.

On the other hand, the continuous applications for unemployment support, of those people who are already receiving support or continue to wait, decreased from 6,786 million to 6,372 million.

On the other hand, in Mexico the Timely Indicator of Economic Activity (IOAE) was published, which estimates in advance the variations of the IGAE. 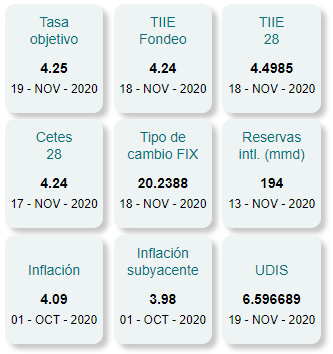 It should be remembered that the latest data available for August from the IGAE showed an annual decrease of 8.5%.

To hedge against a depreciation of the peso beyond 20.50 pesos per dollar, a purchase option (call), with an exercise date within 1 month has a premium of 2.17% and represents the right but not the obligation to buy dollars in the aforementioned level.