The peso starts the session unchanged from yesterday’s close, trading around 19.82 pesos per dollar.

A moderate strengthening of the dollar is observed against most currencies, after losing for four consecutive days, this because market participants are still waiting for the approval of a new fiscal stimulus package in the United States.

It should be noted that, today is the last scheduled session of the Senate and it is likely that lawmakers will continue negotiating through the weekend in the event that no agreement is reached on the stimulus package.

For its part, in the United States, the government is currently operating with provisional funds that expire today, so Congress must approve the spending package for fiscal year 2021 or another short-term financing plan during the session.

The Brexit process also generates some nervousness in the foreign exchange market.

The Prime Minister of the United Kingdom, Boris Johnson, indicated that the talks around the trade agreement with the European Union are in a “serious situation”.

The main differences lie in the fishing industry, so this will be the main topic of discussion today in Brussels.

The British pound is one of the most depreciated currencies this morning, showing a decline of 0.50% to $ 1.3517 per pound.

It should be remembered that today is the expiration day of options and futures in the financial markets, also known in English as “Quadruple Witching Day”, so it is highly probable that an increase in the trading volume will be observed in most markets. financial and portfolio adjustments.

For this reason, episodes of volatility for the exchange rate cannot be ruled out.

Likewise, it is important to note that, during the last two weeks of December, there is normally a significant decrease in liquidity in the foreign exchange market due to the Christmas holidays.

Low liquidity tends to generate calm sessions, although if there are relevant events, volatility is more likely to be observed, due to the low number of participants.

Regarding economic indicators, the National Survey of Construction Companies (ENEC) showed that, during October, the value of production contracted at a real monthly rate of 0.1%, after having increased for four consecutive months.

In its annual variation, the value of production showed a fall of 24.2%, spinning 28 consecutive setbacks.

Inside, it stands out that public sector works show a recovery, decreasing at an annual rate of 24.8%, less than the contraction of the previous month of 26.3 percent.

In contrast, the works contracted by the private sector show an annual decrease of 24.6%, practically unchanged from that observed a month before.

This is due to the great uncertainty that prevents investment in the sector from increasing.

At the state level, only 6 of the 32 entities showed annual advances in their production value, highlighting Oaxaca with an annual growth of 151.5%, mainly driven by the construction of highways in the entity.

On the other hand, the Global Supply and Demand of Goods and Services for the second quarter was published, which presented a quarterly rebound of 12.9%, the first increase after six consecutive quarters in negative territory and after the historical fall of 19.9% ​​in the second trimester. However, in annual terms, supply and demand show a severe contraction of 11.5%, spinning four quarters of setbacks.

Despite the rebound, the most lagging components in annual terms are investment and consumption, with falls of 18.0% and 12.7%, respectively, evidencing the weakness of domestic demand. 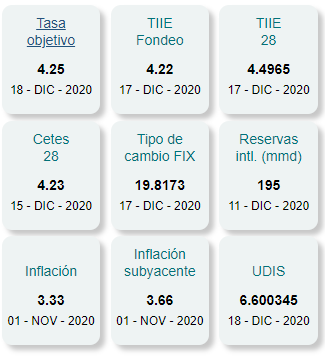 While exports show a decline of 2.7% annually, supported by a more dynamic recovery in the United States. Finally, government spending showed an annual increase of 2.6%, accumulating three consecutive quarters of increases.

To hedge against a depreciation of the peso beyond 20.00 pesos per dollar, a purchase option (call), with an exercise date within 1 month has a premium of 2.04% and represents the right but not the obligation to buy dollars in the aforementioned level.