The peso begins the session with a depreciation of 0.92% or 20.3 cents, trading around 22.36 pesos per dollar, with the exchange rate resuming its upward trend that began last Friday.

Nervousness persists in global financial markets about a possible stagnation of the economic recovery, which has raised the demand for dollars as a refuge.

The dollar weighted index advanced 0.26%, accumulating a weekly increase of 1.93%, the highest since the first week of April.

In the wide basket of main crosses, the peso is the third most depreciated currency in the session, behind the South African rand which lost 1.15% and the Norwegian krone with 1.03 percent.

Losses continue to be seen in other financial markets. In the capital market, the main indices in Europe fall on average about 1.3% and accumulate weekly declines close to 5 percent.

Meanwhile, in the United States the futures market shows falls close to 0.50%, with a negative bias towards companies in sectors considered cyclical, that is, the downward movement is related to unfavorable economic expectations.

Among the factors that promote these movements in financial markets are:

New cases of coronavirus continue to rise. Yesterday, France and the United Kingdom, registered new records of daily cases of coronavirus, reporting 16,096 and 6,634 infections, respectively. Likewise, Germany recorded 2,321 new cases, a maximum not seen since April. Therefore, European governments have chosen to reimpose some contingency measures and order partial closures, identifying the places that may cause a greater transmission of the virus, unlike the total closure of April.

There are doubts that a new fiscal stimulus package can actually be approved in the United States in the weeks leading up to November 3. Despite the fact that yesterday, the Speaker of the House of Representatives, Nancy Pelosi, and the Secretary of the Treasury, Steven Mnuchin, said that they are willing to continue the negotiations around the new stimulus package, the market believes that it will be difficult to reach a bipartisan agreement due to the difference of a trillion dollars between the two proposals.

Losses are also observed in the commodities market, mainly in energy prices, with WTI losing 0.77% at $ 40.00 per barrel and Brent losing 0.33% at $ 41.80 per barrel. It should be noted that among the most depreciated currencies, those of commodity-producing countries stand out, such as the Norwegian krone (-1.03%), the Russian ruble (-0.79%) and the Brazilian real (-0.95 percent).

Regarding economic indicators, this morning the Global Indicator of Economic Activity (IGAE) for July was published in Mexico, which showed a monthly growth of 5.69%, after the rebound of 8.79% in June.

In annual terms, the IGAE still shows a contraction of 9.80%, reaching levels similar to those observed in March 2014.

By large groups of activities, primary schools registered solid monthly growth of 13.85% and annual growth of 10.65%, the highest annual increase since June 2016.

On the other hand, the recovery of the secondary sector moderated, with a monthly growth of 6.92% and an annual fall of 11.58%, being again driven by manufacturing activities, which presented a monthly advance of 10.99 percent. 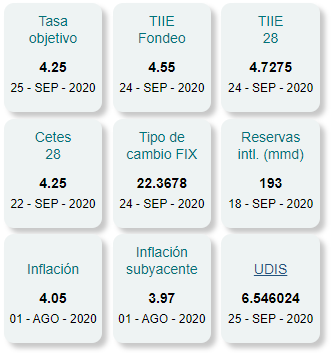 It is worth mentioning that the favorable dynamics of the manufacturing industry is due to the growth of external demand, evident in the Trade Balance for June and July.

Finally, the service sector is the item that continues to show the greatest weakness in its recovery, growing 4.60% per month, showing an annual contraction of 10.00%. Within this, the monthly rebound of temporary accommodation and beverage preparation services stands out with 22.58% and retail trade with 17.61% monthly.

In the United States, the 10-year Treasury bond yield decreased by 0.8 basis point, to 0.66%, while in Mexico the 10-year M bond rate remained unchanged, at a rate of 5.93 percent.

To hedge against a depreciation of the peso beyond 23 pesos per dollar, a purchase option (call), with an exercise date within 1 month has a premium of 1.78% and represents the right but not the obligation to buy dollars in the aforementioned level.