In line with expectations, the peso begins the session with an appreciation of 0.34% or 6.8 cents, trading around 19.83 pesos per dollar, with the exchange rate touching a low of 19.7823 pesos, its lowest level since March 5, when it accumulated just 11 days of upward pressure as a result of risk aversion due to the Covid-19 pandemic.

The appreciation of the peso is mainly the result of a weakening of the dollar, whose index lost 0.15% in the session, accumulating a weekly decline of 1.15%, falling in four of the last five weeks.

The weakness of the dollar is mainly due to two factors:

Optimism continues about a new stimulus package in the United States, after more senators, both Republicans and Democrats, showed their support for the bipartisan proposal of 908 billion dollars.

Republican leader Mitch McConnell has not publicly expressed support for the initiative, but doing so could see a further increase in risk appetite in financial markets.

The expectation that the first vaccines against Covid19 will be applied en masse in the coming weeks generates optimism about the economic recovery in 2021.

UK authorities indicated that most of the first batch of 800,000 Pfizer and BioNTech vaccines has already arrived. It is expected that before the end of the year, more than a million inhabitants will be vaccinated. It is worth mentioning that the pound sterling accumulates a weekly appreciation of 1.13% against the dollar, advancing for five consecutive weeks a total of 4.0%, touching a maximum of 1.3514 dollars per pound, a level not seen since December 13, 2019.

The pound sterling has also been favored by speculation that the United Kingdom could reach a trade agreement with the European Union in the coming days.

In the foreign exchange market, the most appreciated currencies this morning are the South Korean won with 1.37%, the Taiwanese dollar with 0.52%, the Russian ruble with 0.51% and the Mexican peso with 0.34 percent.

Another relevant currency in the exchange market that continues to gain against the dollar is the euro, showing an advance of 0.12% in the session and 1.63% in the week, with the exchange rate touching a new maximum of 1.2178, not seen since April of 2018.

In the raw materials market, the prices of the main oil blends begin the session by extending their gains after the agreement of OPEC and its allies (OPEC +) where they will gradually increase their oil production over the next year.

Finally, in the capital market, the main indices in Europe show moderate gains close to 0.20% on average, while in the United States the futures market shows more solid gains and is likely to start with advances close to 0.40%, mainly from issuers considered cyclical and that will benefit from the arrival of vaccines against Covid19.

Regarding economic indicators, in the United States the monthly employment report showed the creation of 245 thousand job positions during November, below the market expectation of 475 thousand jobs.

Likewise, the unemployment rate was 6.7%, decreasing from the rate of 6.9% observed in October. In the interior, the long-term unemployed who have been without work for more than 27 weeks increased by 385 thousand to 3.9 million.

On the other hand, the trade balance of the United States showed a deficit of 63.1 billion dollars in October, increasing by 1.7% compared to the previous month. In the interior, exports grew 2.2%, increasing for the fifth consecutive month.

While, imports increased at a monthly rate of 2.1%. It should be noted that imports from Mexico to the United States reached a new record high of 33.1 billion dollars.

In Mexico, the Consumer Confidence Indicator (ICC) for November stood at 36.7 points, showing a monthly decline of 1.0 points, after five consecutive months of increases.

In its annual comparison, the ICC registers a drop of 6.7 points, adding twelve months of annual falls.

Within the indicator, all components showed monthly setbacks, highlighting the economic situation of household members, both current (-1.5 points) and expected (-1.5 points).

For its part, the total sale to the public of light vehicles for November was announced, where sales amounted to 95,485 units, representing an annual contraction of 23.5% (vs. -21.3% in October), which reflects that its recovery He stopped. 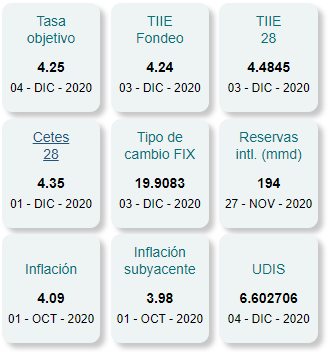 Car sales represent the lowest level for the same month of November since 2012.

For its part, car production registered a level of 312,184 units, standing 1.4% above what was observed in November of last year, being the second consecutive annual increase.

Finally, exports amounted to 287,703 cars, reflecting an annual increase of 4.7%, also being the second consecutive month that car exports have grown at an annual rate.

The figures show that the total recovery in automotive production has been driven by external demand, as exports account for 92.2% of what was produced in November.

It is important to mention that the rating agency S&P Global ratified the rating of Mexico’s sovereign debt at BBB, maintaining the negative outlook.

The rating agency indicated that the country has a weak fiscal profile and there are also risks generated by Pemex, which could worsen Mexico’s assessment of its contingent liabilities.

To hedge against a depreciation of the peso beyond 20.00 pesos per dollar, a purchase option (call), with an exercise date within 1 month has a premium of 1.85% and represents the right but not the obligation to buy dollars in the aforementioned level.