The peso closed the session with little change compared to Monday’s close, showing a moderate appreciation of 0.06% or 12 cents and trading around 22.43 pesos per dollar.

In the session, the performance of the foreign exchange market was mixed, although optimism in the morning prevailed, with the currencies of emerging economies and commodity-producing countries being the most appreciated.

Among the currencies with the greatest advance, the Chilean peso appreciated 1.29%, the Brazilian real with 1.26%, the Turkish lira with 1.10% and the South African rand with 1.10 percent.

In contrast, the two most depreciated currencies were the Japanese yen, which lost 0.57%, and the Swiss franc, which depreciated 0.24%, due to lower demand for safe-haven currencies.

It is important to note that optimism faded in financial markets during the American session, in profit taking and because there is still uncertainty about the future of the global economic recovery.

The major capital market indices closed with a loss in the United States, with the Dow Jones losing 0.38%, the S&P 500 falling 0.80% and the Nasdaq falling 1.69%. In Mexico, the IPC of the Mexican Stock Exchange managed to close higher with an advance of 1.08 percent.

The same was observed in the raw materials market, where industrial metals closed with mixed results. For its part, after starting the session with gains, oil prices registered falls at the close. 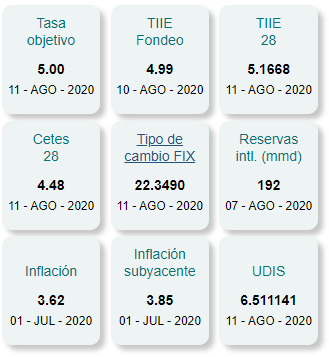 The market still fears that when the summer season ends there will be a considerable reduction in the demand for hydrocarbons, leading to an accumulation of oil inventories.