The peso starts the session with little change compared to Tuesday’s close, showing a moderate appreciation of 0.08% or 1.7 cents and trading around 22.38 pesos per dollar, at the beginning of a session in which currencies show a mixed performance against the dollar, while market participants look for direction.

From a technical point of view, the exchange rate is once again below the 50-day moving average (22.41 pesos per dollar) but a strong downward break has not been observed that would indicate a sustained appreciation of the peso in the coming days. .

It should be noted that, in the five previous sessions, the exchange rate has touched levels below the 50-day moving average, to later close above.

The lateral performance of the exchange rate may be due to the fact that the market is waiting for the Banco de México monetary policy announcement scheduled for tomorrow, Thursday at 1:00 p.m., where an interest rate cut of 50 is anticipated. basis points at a level of 4.50 percent.

The opinion of the Governing Board on the risks to economic growth and inflation will be key in the statement, so that the market evaluates the probability of additional cuts to the interest rate.

In Europe, the main capital market indices show gains, albeit with uneven performance, with indices such as Germany’s DAX advancing 0.06% and London’s FTSE 100 gaining 1.24%. In the United States, the futures market indicates that the market will start the session with gains close to 0.80 percent.

The peso and gold

For its part, in the commodities market, gold stopped its losses from the previous session, to start the day trading at 1,923.81 dollars per ounce, which is equivalent to an increase in its price of 0.62%, as a correction to the sharp fall of 5.69% yesterday Tuesday.

For its part, oil starts the session with gains on the expectation that crude inventories in the United States could have been reduced during the previous week.

According to the American Petroleum Institute (API, for its acronym English), inventories were reduced by 4.01 million, which would mean 3 consecutive weeks of contractions.

It should be mentioned that, the results of the API usually differ from the results of the United States Energy Information Administration (EIA). However, the market uses these data to speculate on those of the EIA, which will be published at 9:30 am.

The WTI starts the session trading at 42.25 dollars per barrel, which is equivalent to an increase in its price of 1.54 percent.

Regarding news and economic indicators, in the United States, inflation in July was at a year-on-year rate of 1.0%, after reaching 0.6% in June. In its monthly comparison, the price index increased 0.6%, above market expectations of 0.3 percent.

The greatest increase was in energy prices, showing an advance of 2.5%, where gasoline increased 5.6% in the interior. On the other hand, food at home showed a monthly contraction of 1.1 percent.

For its part, in Europe it was announced that during the second quarter of the year the GDP of the United Kingdom contracted at a quarterly rate of 20.4%, equivalent to an annualized rate of 59.8%, the largest drop since it has been recorded. (1955). 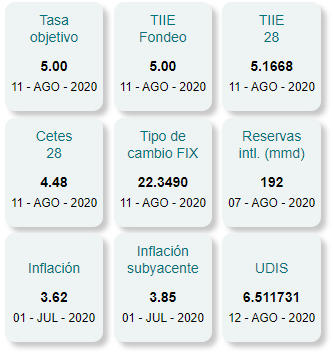 The data did not have a negative effect on the capital market of the United Kingdom, while the pound depreciated moderately 0.30%, as the data was already expected.

Likewise, in June the GDP grew 8.7%, before the reopening process. In line with this, the Bank of England expects the English economy to grow at a quarterly rate of 18 percent in the third quarter.

On the other hand, the Federal Reserve announced yesterday afternoon the reduction of 50 basis points in the rates that it charges to cities and states that seek short-term loans, through the Municipal Liquidity Service (MLF) program.

Through this program, the Fed offers up to 500 billion dollars in loans to states and municipalities, to support flow problems caused by the pandemic.

The adjustment to the interest rate is due to the fact that, since the facility was authorized in April, only one loan has been granted.

During the session, the exchange rate is expected to trade between 22.25 and 22.50 pesos per dollar.

To hedge against a depreciation of the peso beyond 23 pesos per dollar, a purchase option (call), with an exercise date within 1 month has a premium of 1.42% and represents the right but not the obligation to buy dollars in the aforementioned level.