The appreciation of the peso was matched by most currencies, after the Federal Reserve maintained accommodative language in its monetary policy announcement.

It is worth mentioning that the appreciation of the peso was not distinguished from other currencies, as it was the twelfth most appreciated currency. The dollar weighted index closed 0.10% lower, losing ground for the third consecutive session.

In its statement, the Fed announced that the interest rate remains unchanged in a range of 0.00-0.25%. He mentioned that he hopes to keep the rate at this level until labor market conditions have reached levels consistent with maximum employment and inflation rises above 2% for a period of time, to average the 2 percent target.

The peso and GDP

With this, although GDP shows a fall in 2020, GDP for the fourth quarter would be above the fourth quarter of 2019, the result of an accelerated recovery thanks to fiscal and monetary stimuli in that country. If the economy grows 4.2% in 2021, the real GDP would show a growth of 1.7% compared to the GDP of 2019.

Another factor that contributed to the optimism of the global financial market during the session continues to be the possibility that new fiscal stimuli will be approved in the United States in the short term.

According to the Republican leader of the Senate, Mitch McConnell, negotiations are continuing and he believes that an agreement will be reached. In the United States, the S&P 500 closed the session with a gain of 0.18%, while the Nasdaq index registered an advance of 0.50 percent.

On the other hand, Banco de México announced the extension of the term of the swap line established with the Federal Reserve for 60 billion dollars. The mechanism was established on March 19 as a measure to provide liquidity and deal with the instability of financial markets in the face of the Covid-19 pandemic. 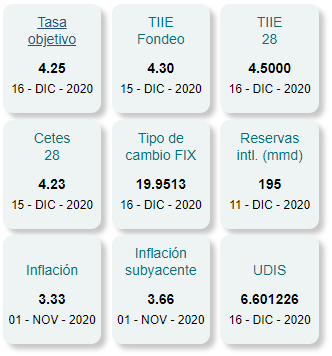