The peso closed with a weekly appreciation of 2.83% or 65.3 cents, trading around 22.40 pesos per dollar, hitting a low of 22.3816 pesos, its lowest level in 7 sessions. The appreciation of the peso was the result of a general weakening of the US dollar, as a consequence of the following factors:

Positive economic data for June, showing a gradual recovery in economic activity. Globally, the final reviews of manufacturing PMIs stood out, which in the Eurozone was adjusted from 46.9 to 47.4 points, while, in the United States, manufacturing ISM exceeded market expectations, reaching 52.6 points.

Likewise, in the United States, in the session on Thursday the non-agricultural payroll registered the creation of 4.8 million jobs, exceeding the market expectation.

Advances in the development of a vaccine against covid19, which may allow the normalization of economic activity in subsequent months. Pharmacists who showed progress in vaccine development are Pfizer Inc and BioNtech SE.

Despite the appreciation of the peso and risk appetite in the markets during the week, there are risks that can generate losses, mainly the increasing number of new cases of coronavirus, particularly in the United States, which has led several states to impose measures of confinement and reverse the reopening process that allowed economic recovery. 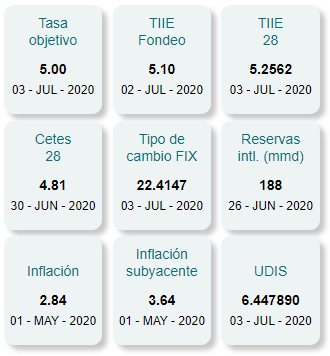