The performance of the exchange rate during the session can be divided into two parts:

In the first part of the session, the peso rapidly depreciated to a price of 22,7005 pesos per dollar, after the initial applications for unemployment support for the week ending September 19 were published in the United States, which increased in 4 thousand to 870 thousand. This generated aversion to risk in the global financial markets, as it is a sign of a stagnation in the recovery of the US labor market, which is especially negative for countries like Mexico, the main trading partner of the United States. Another factor that generated risk aversion was the increasing number of coronavirus cases, mainly in Europe.

In the second part of the session, the peso recovered ground along with other currencies of emerging economies, closing as the second most appreciated currency behind the Brazilian real, which rose 1.45%, followed by the Turkish lira with 1.01% and the Colombian peso with 0.95%. The change in the direction of the exchange rate is mainly a correction after four consecutive sessions of losses of more than 1%, driven by a couple of positive news. On the one hand, the Democratic leader in the House of Representatives, Nancy Pelosi and the Secretary of the Treasury, Steven Mnuchin, pointed out the possibility of resuming negotiations to approve a stimulus package as soon as possible. In addition, Democrats are preparing a $ 2.4 trillion stimulus package according to members of the House of Representatives.

The peso and the real estate sector

Regarding economic indicators, in the United States, new home sales increased at a monthly rate of 4.8%, contrary to what the market expected of a decrease of 0.10%. The August increase is a high not seen since September 2006, driven by low interest rates and demand for homes in the suburbs. This also had a positive impact on the foreign exchange market and coincided with the beginning of the downward correction of the exchange rate.

At 1:00 p.m., Banco de México announced a cut in its interest rate from 25 basis points to 4.25%, being the first cut of that magnitude, after the Central Bank accelerated its relaxation cycle at the beginning of the crisis caused by the coronavirus in March The last 5 decisions had been announced cuts of 50 basis points each, with a total decrease of 250 basis points. From the maximum in August 2019 of 8.25%, the rate accumulates a cut of 400 basis points. Despite the cut, the nominal interest rate is the eighth highest rate globally, while the real rate is the fifteenth highest, standing at 0.15 percent.

In general, a tone of caution was perceived in the statement. The unanimous decision came as a surprise after the fact that in the minutes of the previous monetary policy decisions carried out on June 25 and August 13, a certain discrepancy was perceived regarding the pace of the easing of monetary policy by the members of the meeting. In this sense, Grupo Financiero Base anticipates an additional cut towards the end of the year of 25 basis points to end in 2020 at 4.00% nominal and 0.25% real, considering inflation at the end of the year of 3.75%. It should be noted that, after the announcement, no effect on the exchange rate was perceived. 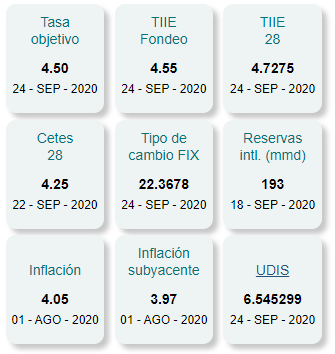 Going forward, the exchange rate will likely continue its upward trend towards the 23-peso level, as the main determinant of global risk aversion, the resurgence of coronavirus cases, continues to rise. Likewise, it is likely that positions will be taken against currencies of emerging economies, in anticipation of episodes of volatility related to the elections in the United States. Next Tuesday, September 29, will be the first of three presidential debates between the Democratic candidate, Joe Biden and Donald Trump, which could affect the perception of the results of November 3.