The peso begins the session with an appreciation of 0.78% or 17.4 cents, trading around 22.11 pesos per dollar, before a general weakening of the US dollar.

This is mainly due to the expectation that the Federal Reserve will maintain a highly accommodative stance in its announcement on Wednesday 29, due to the resurgence of coronavirus cases in the United States and the stagnation in the recovery of the labor market.

The dollar-weighted index starts the week with a 0.74% drop, being the biggest decline since May 26, accumulating a decline of 3.27% so far in July, the largest since January 2018.

Another factor that is weakening the US dollar is the expectation of an escalation of political tensions with China, after last week the two countries interfered with each other’s diplomatic missions. The United States closed the Chinese consulate in Houston, while China closed the American consulate in Chengdu.

For this reason, the trade war is unlikely to end and there could even be a deterioration in the relationship between China and the United States in the diplomatic arena. A conflict of this nature, coupled with the trade war between the two countries, hinders the process of economic recovery amid the greatest recession since the Great Depression.

The peso and the United States

Finally, it is expected that the proposal of the Republican fiscal stimulus package, equivalent to $ 1 trillion, will be released today. Inside could include a second round of direct payments to citizens of $ 1,200.

As for the additional unemployment support, Democrats propose to continue the $ 600 a week until January, while Republicans believe it should be replaced by a benefit that covers 70% of the salary that was held before the layoff.

Market optimism is limited, because while the Republicans’ plan was already expected to be of this magnitude, negotiations with Democrats are likely to delay approval of the plan until the first week of August, before Congress leaves for break.

In the commodity market, the price of gold has reached a new all-time high of $ 1,945.26 per ounce, rising 1.87% this morning, amid increased demand for the metal as a refuge due to political and economic uncertainty.

It should be remembered that adopting a loose fiscal and monetary stance also tends to increase demand for the metal as a store of value. For its part, silver reached a new high in the year of $ 24.6031 per ounce, rising 6.45% this morning.

In the exchange market, the weakening of the dollar allows an advance in most currencies, highlighting the South African rand which appreciates 1.28%, the Swedish krona with 1.06%, the Japanese yen with 0.78% and the euro with 0.76 percent.

It is important to note that the euro reached a level of $ 1.1764 per euro this morning, not seen since September 2018, accumulating an advance of 4.55% in July.

In the week, the markets will continue to watch for the publication of relevant economic indicators, highlighting in the United States the preliminary estimate of economic growth for the second quarter that will be published on Thursday 30 at 7:30 a.m.

For its part, in Mexico, on Thursday 30 at 6:00 a.m., the timely growth estimate for the second quarter will be published, where Banco Base anticipates a quarterly GDP contraction of 16.6% and an annual contraction of 18.3 percent.

Regarding indicators this morning, the balance of Mexico’s trade balance in June registered a surplus of $ 5.546.66 million, after registering a deficit of 3.522.62 in May, in original figures.

Exports showed a rebound of 75.57% per month (-18.35% per year), driven by the increase in manufacturing exports of 83.57% compared to the previous month, according to seasonally adjusted figures.

In contrast, imports advanced 22.24% per month (-28.21% per year), evidence that a great internal weakness still persists despite the relaxation of mobility restrictions. Within imports, the increase in intermediate-use goods of 27.21% at monthly rate stands out, consistent with the recovery observed in manufacturing.

In the first half of the year, the trade balance registered a balance of 2,659.1 million dollars, which represented a decrease of 17.81% in relation to the same period of the previous year. 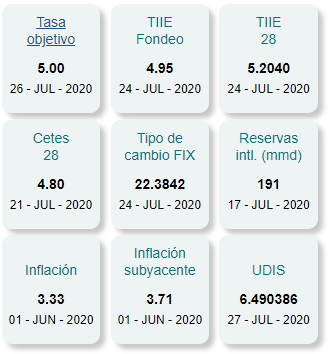 During the session, the exchange rate is expected to trade between 22.05 and 22.25 pesos per dollar. The euro begins the session with an appreciation of 0.76%, trading around 1.1743 dollars per euro, while the pound appreciates 0.41% and is trading at 1.2847 dollars per pound.

To hedge against a depreciation of the peso beyond 22.50 pesos per dollar, a call option, with an exercise date within 1 month, has a premium of 1.86% and represents the right but not the obligation to buy dollars in the level mentioned above.