In the session on Wednesday, the peso begins with an appreciation of 0.74% or 16.8 cents, trading around 22.50 pesos per dollar, in a correction after the exchange rate reached a maximum of 22.9097 pesos during the previous session.

The weighted index of the dollar begins with a fall of 0.46%, losing against most of its main crosses, before a greater optimism that the congressmen in the United States will succeed in approving a fiscal stimulus package in the coming days.

The calm in the markets is also due to the United States and China planning to make an evaluation of the trade agreement signed in January, according to people close to the Trump administration.

This could moderate the growing political tensions between the two countries. A discussion is likely to take place in mid-August between the United States’ trade representative Robert Lighthizer and Liu He, China’s deputy prime minister.

For their part, capital markets show gains, particularly in Europe, which contributes to risk appetite in global financial markets.

This is due to the publication of positive indicators, in particular the PMI of the services sector. In July, the compound PMI (which includes services) of the Eurozone, was located at 54.9 points, exceeding the market expectation to be at its highest level in two years.

The peso and the gold

This is due to the expectation of expansionary fiscal and monetary policies for an extended period of time, which is combined with risks for global economic growth. This increases the demand for gold as a store of value and a safe haven.

On the other hand, the WTI starts the session with a gain of 4.10%, standing at $ 43.41 per barrel, in view of the expectation of a significant reduction in inventories of US crude.

According to the American Petroleum Institute (API), during the week ending July 31, inventories fell by 8.59 million barrels (m bbl).

Although the weekly API report typically differs from the US Energy Information Administration (EIA) report, the market uses this data to speculate on the EIA data, which will be released at 9:30 a.m. hours.

If so, this would be the third consecutive contraction in oil inventories, which could mean that supply and demand fundamentals are rebalancing.

Regarding economic indicators, a few moments ago the US trade balance for June was released, which showed a deficit of 50.7 million dollars, decreasing 7.5% compared to the previous month.

Also, the monthly Automatic Data Processing (ADP) employment report was published, which estimated that in the United States only 167 thousand jobs were created in July, well below market expectations that anticipated the creation of 1.2 million jobs. .

Official data on job creation will be released on Friday, where it is expected to see a slowdown compared to previous months due to the increase in coronavirus cases at the end of June, allowing in turn an increase in permanent unemployment. .

For its part, in Mexico, the Telephone Survey of Occupation and Employment (ETOE) referring to the month of June, revealed the return of 5.7 million people to the Economically Active Population (PEA); Of these, 4.8 million were classified as employed and 901,000 were unemployed.

This caused the unemployment rate to rise from 4.7% in May to 5.5% in June, the highest rate since June 2011, although still below the August 2009 peak of 5.7%. However, from March to June, the employed population continues to register a decrease of 7.4 million people. 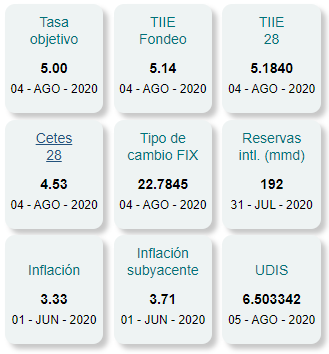 Similarly, the underemployment rate decreased from 29.9% observed in May to 20.1% in the reference month. The figures show a gradual recovery in the labor market after the suspension of non-essential activities during April and May. However, the number of people whose income has been affected still remains high.

To cover a depreciation of the peso beyond 23 pesos per dollar, a call option, with an exercise date within 1 month, has a premium of 1.68% and represents the right but not the obligation to buy dollars in the level mentioned above.