The peso begins the session with an appreciation of 0.70% or 15.8 cents, trading around 22.33 pesos per dollar, as a greater appetite for risk was observed in the global financial markets for the second consecutive session.

This is because the leaders of the European Union approved a fiscal stimulus for 750 billion euros.

The package is divided into 390 billion grants and 360 billion in low interest rate loans. The euro remained stable after approval of the stimulus. However, an optimistic reaction was observed in other markets.

The capital market reacted with gains, with the main indexes in Europe advancing close to 2% on average, highlighting the DAX of Germany with an advance of 1.88% and the FTSE MIB of Italy advancing 2.03 percent.

Optimism has carried over to the American session, as the futures market points to indices in the United States starting with gains above 0.70 percent.

It should be remembered that in the United States there is also the expectation that a fiscal stimulus package of at least $ 1 trillion will be approved before the end of the month, which fuels the gains in the US capital market.

The peso and the oil

It should be added that the optimism of the financial markets is also present in the raw materials market, where the price of oil registers strong advances.

The price of oil is advancing in anticipation of a recovery in demand for crude oil after advances in initial tests of a coronavirus vaccine were reported yesterday.

Likewise, it is expected that a decline in crude inventories in the United States will be released again this week.

Gold and other currencies

Among the main crosses, the five most appreciated currencies are the Australian dollar, with an increase of 0.91%, the South African rand with an appreciation of 0.90%, the Mexican peso with 0.70%, the Norwegian krone with 0.63% and the Brazilian real with 0.58 percent.

For their part, gold and silver reached annual highs once again due to the weakening of the dollar and the expectation of more economic stimuli considered inflationary. 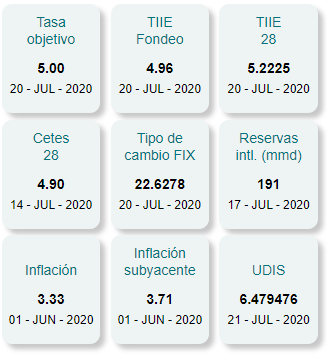 It should be mentioned that the large increase in the price of silver is also due to the expectation of a recovery in the demand for industrial metals, given the broad economic stimuli, together with the concerns regarding supply from Latin America. , due to the increase in the number of coronavirus cases.

The 10-year Treasury bonds in the United States and the 10-year M bonds in Mexico begin the session with little change compared to Monday’s close, showing yields of 0.61% and 5.84%, respectively.

To cover a depreciation of the peso beyond 23 pesos per dollar, a call option, with an exercise date within 1 month has a premium of 1.45% and represents the right but not the obligation to buy dollars in the level mentioned above.