The peso starts the session with an appreciation of 0.64% or 14.1 cents, trading around 22.06 pesos per dollar, as a result of a general weakening of the US dollar, whose index falls for the fifth consecutive session and loses 0.31%, reaching 1,167.92 points, its lowest level since June 2018.

The weak dollar is due to the persistence of uncertainty regarding the future of the US economic recovery, since there is still no agreement at the congressional level that allows a continuity of fiscal stimulus.

It has been reported in the media that Republican senators plan to present a new version of their stimulus package, after negotiations to approve the new fiscal package have stalled.

The plan includes $ 300 in unemployment support, additional funds for the Postal Service, and financing for small businesses.

For their part, the Democrats have offered to cut their proposal by a trillion dollars, from the initial 3.5 trillion. There is no clarity on the exact date of publication of the Republican proposal, or if it is planned to call an extraordinary vote.

On the other hand, trade tensions between the United States and China continue. Yesterday the United States Department of Commerce issued new restrictions that affect the Chinese technology company Huawei, where non-US companies that do not have a special license are prohibited from selling any chip manufactured with technology to Huawei. U.S.

The peso and its level

In the foreign exchange market, the most appreciated currencies this morning are the Mexican peso with 0.64%, the South African rand with 0.59%, the British pound with 0.54%, the Japanese yen with 0.49% and the Canadian dollar with 0.37 percent.

It should be noted that the Mexican peso is again near the key support of 22.00 pesos per dollar. The foregoing is due to the fact that, since last week after Banco de México’s monetary policy announcement, the market began to speculate on the possibility that the Governing Board would halt the monetary easing process.

This morning the weak dollar has given a boost to part of the commodity market, particularly industrial and precious metals.

For their part, energy products show little change, with the price of WTI falling 0.63% to 42.62 dollars per barrel, due to the fact that market participants are waiting for the weekly statistics from the EIA tomorrow Wednesday and also for a meeting of OPEC + officials to analyze compliance with the commitment to cut oil production.

In the capital market, moderate gains are observed in Europe, with the main indices advancing 0.6% on average, while the futures market points to an opening with moderate gains in the United States.

Regarding economic indicators, in Mexico the Monthly Survey of the Manufacturing Industry (EMIM) was published for June, the first month of the new normal, observing a monthly recovery in hours worked of 17.78% and in real average wages of 1.69%. hundred.

On the other hand, employed personnel showed a marginal increase of 0.03% compared to the previous month, after registering 12 consecutive months of decline; although, at an annual rate it fell 5.67 percent.

While, in original figures, the plant capacity used was at 66.2%, after reaching 45.4% during May as a result of the confinement. 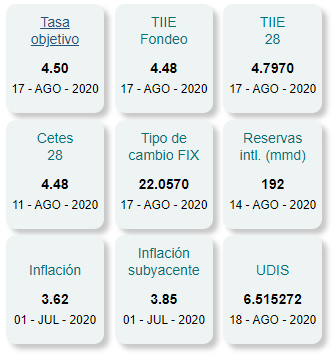 However, given the implementation of health protocols that reduce working hours, the plant capacity used is still below pre-pandemic levels of 80 percent.

On the other hand, the value of production presented a contraction of 12.73% annually, after the historical fall of 45.10% in May.

To hedge against a depreciation of the peso beyond 22.50 pesos per dollar, a purchase option (call), with an exercise date within 1 month has a premium of 1.61% and represents the right but not the obligation to buy dollars in the aforementioned level.