The peso begins the session with an appreciation of 0.61% or 13.7 cents, trading around 22.31 pesos per dollar, given an increase in risk appetite in global financial markets, which has allowed most currencies to recover ground against the dollar.

From a technical point of view, the exchange rate has pierced the key support of the 50-day moving average that stands at 22.3946 pesos per dollar, which increases the probability of a movement towards the 22.20 pesos level.

The currencies that appreciated the most against the dollar were the South African rand, which advanced 1.13%, the Norwegian krone with 1.13% and the Russian ruble with 0.89 percent.

The greater appetite for risk is due to the fact that in the United States, President Donald Trump indicated that he is considering a cut in the capital gains tax that is located at 20 percent.

Although the executive cannot approve the measure without authorization from Congress, it could sign an executive order with an equivalent measure. However, this could lead to a negative response from Congress in the coming months.

It should be added that this initiative would mainly support high-income people, although Trump mentioned that he is also considering a cut in income taxes, aimed at the middle class.

On the other hand, the President of Russia, Vladimir Putin, reported that the first vaccine against the coronavirus has already been registered in his country.

It should be noted that the vaccine being developed by the Gamaleya Institute and by the Russian Direct Investment Fund, has not completed the final phase of clinical trials.

However, according to Putin, the results have been good enough that some doctors will be able to receive the dose by the end of the month.

Then, in October, a massive vaccination campaign will begin, starting with teachers and medical personnel.

Capital markets have reacted with strong optimism to both news since the Asian session, where Japan’s Nikkei 225 index advanced 1.88% and Hong Kong’s Hang Seng registered a gain of 2.11 percent.

In Europe, the main indices show an average advance of 2.6% so far this session, while in the United States, the futures market indicates that the main indices could start with gains close to 1 percent.

The commodities market is also optimistic, with gold trading around $ 1,978.14 per ounce, which is equivalent to a 2.43 percent contraction.

The decline in gold is all about profit taking and it is likely to move forward again, piercing the current all-time high and heading towards the $ 2,200 per ounce level as this precious metal has been helped by uncertainty and by economic stimuli from governments and central banks.

For its part, the price of oil is gaining ground also due to the increase in the appetite for risk in global financial markets and the expectation of greater stimuli at the global level, which generates optimism around the demand for oil.

In China, the auto market strengthened for the fourth consecutive month. Sales increased 16.4% in annual terms, during the month of July, which may be a sign of a preference for cars in the face of the coronavirus pandemic.

If so, this trend can be observed in the rest of the world, which would not only benefit the automotive sector, but also the global oil sector. WTI is trading around 42.69, which is equivalent to an increase of 1.79% in its price, while the price of Brent increases by 1.36% to 45.60 dollars per barrel.

Regarding economic indicators, this morning the Monthly Industrial Activity Indicator (IMAI) for June was published in Mexico, the first month of the new normal, which showed an advance of 17.89% per month, according to figures adjusted for seasonality, then of 4 months of setbacks and touching in May the lowest level since November 1995.

In annual terms, the indicator fell 17.53% compared to June 2019. Within the IMAI, the four components showed monthly increases, where the growth of the construction sector (17.46%) and the manufacturing industry (26.72 percent) stand out. 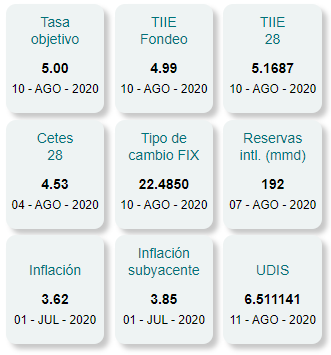 While the beginning of the recovery of the construction sector was mainly supported by construction (+ 20.74%) and specialized jobs (16.41 percent).

It should be noted that the result of the indicator was close to expectations and is part of the performance of economic activity in the second quarter, so it does not modify current growth expectations.

During the session, the exchange rate is expected to trade between 22.20 and 22.50 pesos per dollar. The euro starts the session with an appreciation of 0.53%, trading at 1.1800 dollars per euro, while the pound appreciates 0.38% and trading at 1.3123 dollars per pound.

To hedge against a depreciation of the peso beyond 23 pesos per dollar, a purchase option (call), with an exercise date within 1 month has a premium of 1.44% and represents the right but not the obligation to buy dollars in the aforementioned level.