The peso begins the session with an appreciation of 0.58% or 13.2 cents, trading around 22.63 pesos per dollar, in a partial correction to the 1.40% drop in the session on Monday, while continuing to observe caution in most markets global financials.

In Europe, the main indices show falls on average of more than 1 percent.

The lower risk appetite of the markets is due to factors that had already affected the financial markets since Monday afternoon:

Given the increase in Covid-19 cases, countries continue to slow down the reopening process and in some cases have reversed it.

In the United States, the Governor of California ordered the closure of all indoor entertainment centers, including bars and restaurants.

For its part, the Hong Kong government indicated that the gyms should remain closed for a week, while the Disneyland Hong Kong park will close from July 15 and until further notice.

The Japanese government is again considering declaring a state of emergency, and Iran has again closed schools and religious congregation sites.

Tensions between China and the United States continue to rise, the Trump administration yesterday rejected China’s efforts to expand the area of ​​influence in the South China Sea.

On the other hand, the Asian country announced sanctions to the aerospace company, Lockheed Martin Corp., because the United States approved an agreement for the supply of missile parts in Taiwan.

Negative economic indicators have been published. In Singapore, economic activity contracted at an annualized rate of 41.2% during the second quarter, being the largest decline on record.

For its part, in the United Kingdom the economy grew 1.8% monthly during May, after having fallen 20.3% in April.

Growth of 1.8% was considerably less than anticipated by the market.

The Singapore dollar starts the session with a depreciation of 0.18%, while the pound sterling loses 0.19 percent.

Finance in the US

On the other hand, this morning the first quarterly results were published in the United States, concentrated on financial sector stations.

JP Morgan results showed that during the second quarter earnings fell 51% or $ 4.69 billion, which is less than expected.

The results were boosted by the record in income from market operations, which doubled compared to the previous year. Thus, this company recorded $ 1.38 earnings per share, beating estimates of 0.36.

In the case of Wells Fargo, the company reported a quarterly loss of 2.4 billion dollars, the first since 2008, to settle with earnings per share of -0.66.

Finally, Citigroup showed a quarterly result similar to JP Morgan, with a significant decrease in its income, to $ 0.50 of earnings per share.

The contraction in its income was also less than expected, due to an increase in income from market operations.

Regarding economic indicators, inflation in the United States was published in June, which was located at an interannual rate of 0.6% after locating at 0.1% interannual during May. 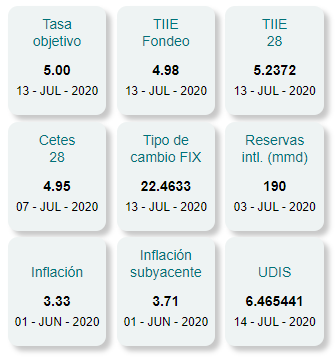 Inland, core inflation increased at a monthly rate of 0.2%, the first increase since February. The increase was driven by the clothing, housing and health care indices.

On the other hand, energy prices showed an increase of 5.1 percent.

To cover a depreciation of the peso beyond 23 pesos per dollar, a call option, with an exercise date within 1 month has a premium of 1.97% and represents the right but not the obligation to buy dollars in the level mentioned above.