The foregoing was the result of a general weakening of the US dollar, whose weighted index registered a decline of 1.54% in the month, accumulating five consecutive months down with a decline of 6.91 percent.

Likewise, the weakness of the dollar was accentuated in the months of July and August, given the evidence that the Covid19 pandemic could continue, making the economic recovery in the United States slow and increasing the probability that the Federal Reserve will maintain a highly monetary stance. accommodating for several years.

In August, the Federal Reserve modified the framework for monetary policy.

Although the dual mandate of maximum employment and inflation of 2% is maintained, now more importance will be given to the employment mandate, allowing inflation to fluctuate above its target.

This was interpreted by the market as accommodative, since it could allow the economy to overheat during the recovery period without the Fed considering raising its interest rate.

The weakness of the dollar allowed most of the currencies to gain ground, with the exception of some currencies of emerging economies such as the Turkish lira that depreciated 5.22%, the Brazilian real that lost 4.65% and the Argentine peso that lost 2.51 percent.

This was mainly due to factors of political uncertainty in these countries.

The peso and its trend

Going forward, the Mexican peso could continue to gain ground, approaching the level of 21.50 pesos per dollar, last seen in the first half of June.

The greater appreciation of the peso would be related to the weakness of the dollar and not to a lower perception of risk over the country, since the number of infected and dead by Covid19 in the country continues to rise and this represents a risk for the economic recovery towards the end of the year in 2021, mainly in the services sector.

It should be noted that, in the month, the yield rate of the 10-year M bonds showed an increase of 35 basis points to 6.08%, observing a similar movement along the yield curve, with the exception of short rates. term.

The interest rate is inversely related to the price, therefore, increases in the rates of return of the securities are related to lower prices and lower demand for these bonds.

Therefore, the increase in the yield of M bonds may be evidence of a greater perception of relative risk on the Mexican economy and of capital outflows.

During September, markets are expected to remain attentive to the pace of the economy’s recovery and the development of the pandemic.

Thus, positive signs about a coronavirus vaccine or treatments that reduce the probability of death, could generate episodes of optimism.

On the contrary, evidence of a resurgence of cases, particularly in advanced economies, could put the stability of financial markets, mainly the capital market, at risk. 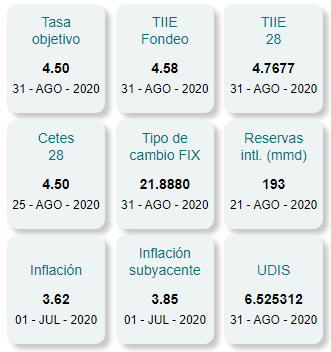 In this scenario, the currencies of emerging economies are the ones that could continue to show the greatest vulnerability and a greater risk of depreciation.