The peso closed the week with an appreciation of 1.03% or 22.5 cents, trading around 21.54 pesos per dollar, gaining ground for the fourth consecutive week.

Among the main crosses of the dollar, the most appreciated currencies in the week were the Brazilian real, which advanced 1.72%, the Mexican peso with 1.03%, the Colombian peso with 0.80% and the Chilean peso with 0.69 percent.

Of the 10 most appreciated currencies in the week, nine are from emerging economies, as the only exception was the Canadian dollar, which advanced 0.32%. Positive weight performance is due to the following factors:

During the week, favorable economic information was published at a global level, particularly for the United States, indicating that the economy continued to recover during August. Likewise, the US trade data for the month of July confirmed Mexico as its main trading partner. In summary, the expectation of a sustained recovery in the United States contributes to the expectation of a recovery in the Mexican economy. The Mexican peso was probably also boosted by the possibility that the first vaccines against Covid19 will be distributed from November, which could accelerate the recovery process.

The Mexican peso moved in line with other currencies of emerging economies that showed a correction after the sharp falls at the beginning of the pandemic. In particular, the Mexican peso showed a high correlation with the Brazilian real, which appreciated 1.72%, given better-than-expected economic data in that country and the expectation that a fiscal austerity regime will be implemented from 2021.

There are other factors that promote speculation in favor of the peso, such as the expectation of a high flow of remittances during the rest of 2020 and the growing exports to the United States, which have brought the trade surplus with that country to a historical maximum of 10,639.1 million dollars in July. In the first seven months of the year, the trade surplus with the United States amounts to 55,660.8 million dollars and could reach 110,000 million dollars at the end of the year.

In the week between Wednesday, August 26 and Tuesday, September 1, speculative positions awaiting an appreciation of the peso in the Chicago futures market rose by 2,107 contracts or 54.56% to 5,969 contracts.

It is important to reiterate that, despite the appreciations, the Mexican peso faces significant risks, highlighting a greater perception of risk on the global economy and on the Mexican economy. 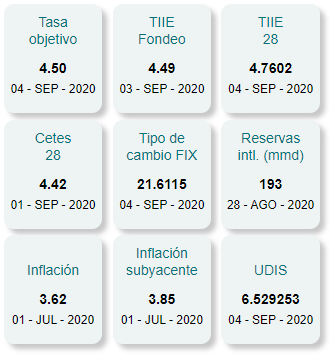 At the close of today, the peso accumulates a depreciation in the year of 13.80% or 2 pesos and 61 cents, ranking as the sixth most depreciated currency in the wide basket of main crosses.