The appreciation of the peso occurred alongside a strengthening of various currencies of emerging economies against the dollar, given the publication of positive economic indicators for manufacturing, a sign that the economic recovery continued during August.

In China, the Caixin manufacturing PMI indicator for August was published, which stood at 53.1 points, its highest level since January 2011. For its part, the Euro Zone PMI stood at 51.7 points in August, slightly below from the reading of 51.8 points in July.

For its part, in the United States, the ISM manufacturing indicator stood at 56 points, above the previous reading of 54.2 points and its best level since November 2018.

Inside, the index that showed the greatest increase was that of new orders, increasing 6.1 points and standing at 67.6 points.

In the session, the Global Risk Perception Base Indicator (PPI) stood at -12 units, which implies a low risk appetite.

The lateral trend of the index is due to the fact that the components, which are divided between the currency market, money, commodities, capitals and country risk, will show mixed results.

Although an improvement in economic activity has been observed, there is still wide uncertainty in the market.

The peso and currencies

In the foreign exchange market, the most appreciated were the Brazilian real with an advance of 1.98%, the South African rand with 1.72% and the Colombian peso with 1.70 percent.

In the foreign exchange market, the 10 most appreciated currencies during the session were from emerging countries, which is due to the signs of economic recovery after the publication of the PMI indicators.

The most depreciated currency was the Swiss franc, which closed down 0.59 percent.

In the capital markets, the Asian and European sessions closed with mixed results, with strong gains observed during the American session, which took the indices in the United States to new all-time highs.

In the case of the US capital markets, the advance to new highs was due to the publication of the ISM manufacturing indicator for August, which is combined with the expectation of a broadly accommodative monetary policy.

In Mexico, the IPC of the Mexican Stock Exchange followed the behavior of the US market, advancing 1.76%. However, the IMEF economic indicators were not so favorable.

The IMEF manufacturing indicator stood at 45.01 points, adding 16 months below the expansion threshold of 50 points.

The index presented a decline of 2.76 points, after the rebound in June and July.

For its part, the IMEF non-manufacturing indicator stood at 46.05 points, remaining for the seventh consecutive month in contraction territory.

Similarly, the non-manufacturing index showed a fall of 1.08 points in relation to July and of 2.00 points compared to the same month of the previous year. 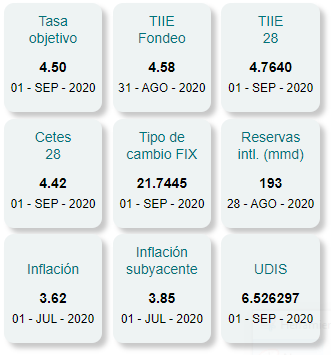 President López Obrador presented his second Government Report today. The exchange rate did not react significantly to the publication of the report.