The peso closed the session with an appreciation of 0.37% or 7.8 cents, trading around 20.86 pesos per dollar, touching a low of 20.8480 pesos, ranking as the most appreciated currency in the wide basket of main crosses.

The appreciation of the peso occurred alongside a weakening of the US dollar, which ended up losing 0.26% according to the dollar weighted index, accumulating five sessions down.

With today’s appreciation, the peso is heading to gain ground for the sixth consecutive week, something not seen since the end of 2018.

The weakness of the dollar is due to the fact that the market expects the Federal Reserve to continue with a broadly accommodative monetary stance for a prolonged period of time, given the possibility that the economic recovery in the United States will be slower than anticipated and due to expectations that inflation in that country will remain on average below 2% until 2023.

For its part, the peso is positioned to continue appreciating, as the market considers that interest rates will stop falling rapidly in Mexico.

This is due to inflation rising to 4% during August, gradually reducing Banco de México’s room for maneuver to adopt a more flexible monetary stance.

The peso and capital

As a consequence of the highly accommodative policy in the United States and the high rate in Mexico, added to greater optimism at the global level, there has been a return of capital flows to the country, breaking the outflow streak that occurred in August. generated in the holding of government securities for five consecutive months.

The inflows of foreign portfolio investment are not concentrated in the capital market due to the expectation of a slow recovery in Mexico and the high interest rate.

Another factor that has favored the peso is the bets on the Chicago futures market that until last week continued to increase. Therefore, the exchange rate could continue with its downward trend, towards a level where in the long term (last 5 years) there appears to be a convergence between 20.50 and 20.60 pesos per dollar. 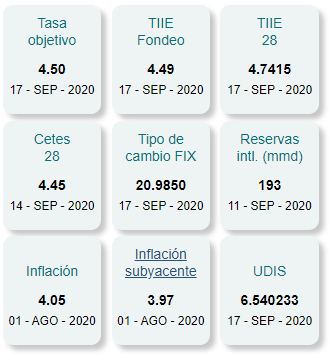 The decreases in the exchange rate continue to be associated with the carry trade effect and are not related to the economic growth of Mexico, since from the real economy side there continues to be a pessimistic scenario of a fall in GDP this year of 9.5% and a slow recovery for the following years.