The peso begins the session with a depreciation of 0.49% or 10.2 cents, trading around 21.04 pesos per dollar, as a correction to yesterday’s appreciation that took the exchange rate to a new low since March 11 of 20.9229 pesos.

This was due to the fact that the dollar weighted index strengthened overnight.

During Wednesday’s session, the peso appreciated after the Federal Reserve reiterated accommodative language in its monetary policy announcement, in which it kept the interest rate unchanged in a channel between 0.00 and 0.25% and sent the signal of that the rate is likely to remain at that level through 2023.

Although the Fed estimates a shallower economic contraction in its projections, with an annual fall in GDP of 3.7% during 2020, they also anticipate a slower economic recovery, for which Jerome Powell stressed the need for new fiscal stimulus.

As the Fed continues to see risks to the economic recovery, most capital markets in the United States closed Wednesday’s session with losses and are likely to post declines in Thursday’s session.

In the European capital market, the main indices show an average decline of 0.80%, while, in the United States, the futures market shows severe falls of over 1%, mainly for the Nasdaq, which could start with a decline of 2.1%. hundred.

The markets will continue to focus on the publication of economic recovery indicators.

The perception of risk is also due to other factors, mainly the evidence that the coronavirus continues to advance globally, as total cases exceeded 30 million.

In Europe, cases also continue to increase, in Germany 1,855 new infections were reported, a maximum not seen in two weeks.

In the commodities market, the prices of the main oil blends start the session with little change, while market participants wait for the meeting of OPEC and its allies, to know their supply expectations and if there will be some change to their cuts in oil production.

Of the economic indicators scheduled for today, in the United States the applications for unemployment benefits for the week ended on September 12 stood at 860 thousand, decreasing by 33 thousand compared to last week.

On the other hand, the continuous applications for unemployment support, of those people who are already receiving support or continue to wait, decreased from 13,544 million to 12,628 million.

In the minutes after the publication, no movements were observed in the financial markets.

On the other hand, this morning the Bank of England announced its monetary policy, unanimously keeping its interest rate unchanged at 0.1%, without modifying the rest of its monetary stimuli.

The statement sent the signal that additional monetary stimulus could be implemented in November. 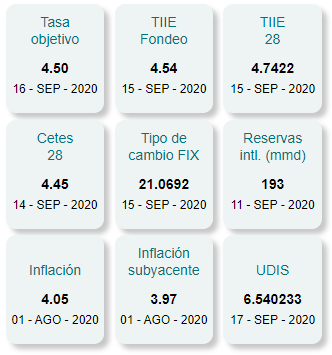 In particular, it highlights that the Bank of England commented that it will evaluate with regulators the possibility of implementing negative interest rates. The pound starts the session with a depreciation of 0.66%, trading at 1.2881 dollars per pound. The most depreciated currencies this morning are the Norwegian krone (-0.72%), the Hungarian forint (-0.68%), the Brazilian real (-0.67%), the British pound (-0.66%) and the Turkish lira (-0.61 per hundred).

To hedge against a depreciation of the peso beyond 22 pesos per dollar, a purchase option (call), with an exercise date within 1 month has a premium of 1.03% and represents the right but not the obligation to buy dollars in the aforementioned level.