The peso starts the session with little change, trading around 22.40 pesos per dollar, falling about 13 cents after the publication of the non-farm payroll in the United States, which during June increased by 1,763 million, above market expectations, of 1.4 million.

The number of people registered as temporary unemployment decreased by 1.3 million, while the permanent unemployed remained at 2.9 million.

Despite optimism about the release of employment data in the United States, there is still nervousness in the international financial market, due to the following factors:

The probability that a fiscal stimulus package will be approved in the United States on Friday has been reduced.

Yesterday’s meetings between Democrats and Republicans made no progress, with Treasury Secretary Steven Mnuchin noting that the leaders of both parties hold very far apart positions on relevant issues.

Part of the nervousness may be moderated because, given the stalemate in the negotiations, Donald Trump declared that he plans to sign executive orders to extend unemployment support benefits and suspend the collection of some taxes, resources that would come from the stimulus package of 2 trillion dollars approved in March, which has not been used in its entirety.

It is important to mention that today is the last day before Congress goes into recess in August, so in the event that an agreement on the new stimulus package is not reached, negotiations would resume until September 7. .

Donald Trump signed an executive order banning the use of the Chinese apps TikTok and We Chat. The president of the United States indicated that the use of the platforms represents a risk to national security, the order will take effect within 45 days. The new restrictions further escalated tensions between the two countries, since, although WeChat is not widely used by citizens, it is used by businessmen to maintain communication with China.

Trump also announced the imposition of new tariffs on certain Canadian aluminum models. According to the US president, the aluminum industry is depressed in the United States, so a 10% tariff can be justified under a national security clause. However, Chrystia Freeland, Canada’s Deputy Prime Minister called the tariffs “unjustifiable and unacceptable” and vowed to retaliate commensurately.

In Europe, the capital markets show a negative performance, although with moderate losses, while in the United States, the futures market indicates that the main indices could show deeper falls, close to 0.50% at the beginning of the session.

In the commodity market, the price of WTI oil shows a decline of 1.19%, trading at 41.45 dollars per barrel, also observing falls in the prices of other energy derived from oil.

The decline in the price of gold is mainly due to the strengthening of the US dollar.

Regarding economic indicators in Mexico, in July headline inflation was at an interannual rate of 3.62%, showing a moderate upward momentum for the fourth consecutive month and being the highest inflation rate since July 2019.

Monthly inflation was 0.66%, being the highest for the same month since 1999. With the inflation data, Banco Base adjusts its inflation expectation at the end of the year from 3.40% to 3.55 percent.

In the interior, the underlying component increased 0.40% monthly and 3.85% year-on-year, driven by the increase in the price of non-food merchandise of 0.70% monthly. 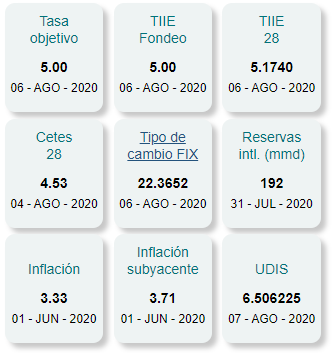 While the services subcomponent maintains a moderate advance of 0.13%, evidence of the prolongation of the closures of some establishments related to the sector.

On the other hand, the non-core price index showed an increase of 1.48% monthly and 2.92% year-on-year, again pressured by the increase in the price of gasoline of low (5.64%) and high octane (5.26%), derived from a greater mobility that has increased demand since it has been maintained since March without fiscal incentives to the Special Tax on Production and Services (IEPS).

To hedge against a depreciation of the peso beyond 23 pesos per dollar, a purchase option (call), with an exercise date within 1 month has a premium of 1.31% and represents the right but not the obligation to buy dollars in the aforementioned level.