From a technical point of view, the level of 20.00 pesos per dollar has become a key support that has not been able to be pierced with force.

The foregoing shows that the positive news about the effectiveness of the Covid19 vaccine or the probable peaceful transition from the government of Donald Trump to the government of Joe Biden, are events that have already been discounted by the exchange rate.

In the wide basket of main crosses, the Mexican peso ranked as the tenth most appreciated currency.

The most appreciated currency was the Norwegian krone with an advance of 1.48%, followed by the South African rand with an appreciation of 1.36% and the Brazilian real with 1.09%, the three currencies of economies that produce raw materials and it is that today the WTI price continued to rise, closing at 44.84 dollars per barrel, showing an advance of 4.13 percent.

As a result, the Norwegian krone accumulates an appreciation of 6.63% in the month, while the rand has advanced 6.40% and the Brazilian real 6.43 percent.

The increase in the price of oil is mainly due to the expectation that the availability of a vaccine against Covid19 will allow the accelerated recovery of the demand for energy.

In the capital markets, most of the main indices globally posted gains of more than 1%. In the United States, the Dow Jones, which includes companies considered cyclical, advanced 1.54%, reaching a new all-time high of 30,116.51 points.

Although negative news about the advance of the coronavirus continues to be released in the short term, the attention of the markets, particularly that of capitals, has focused on 2021 and the expectation of an accelerated economic recovery thanks to the availability of vaccines that are pending for approval.

During the session, the publication in Mexico of inflation for the first fortnight of November stood out, reaching a biweekly rate of 0.04%, being the lowest for the same period since the series began.

At a year-on-year rate, inflation was 3.43%, after being above 4% in four of the last six fortnights. 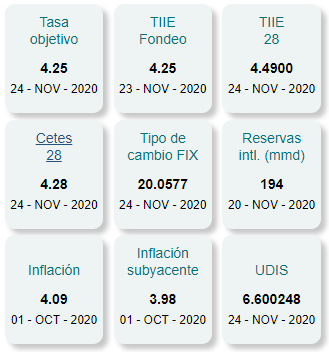 With the inflation published today, the expectation for the end of the year is modified from 3.85% to 3.70% and there is room for another cut in the interest rate in the next three months.