The peso begins the session with a depreciation of 0.50% or 11.1 cents, trading around 22.48 pesos per dollar, in a rebound effect from the appreciation of 1.31% in the session on Wednesday.

The weighted index of the dollar shows a moderate appreciation of 0.05%, therefore, the depreciation of the peso is interpreted as a greater perception of risk over Mexico and other emerging economies.

The most depreciated currencies are the South African rand, which lost 1.17%, the Brazilian real, which fell 0.97%, and the Norwegian krone, which depreciated 0.50% as it was an oil producer.

In the commodities market, the WTI price shows a 0.55% drop, trading at $ 41.96 per barrel, after four consecutive sessions of gains.

The rest of the commodities market shows a mixed performance.

It should be noted that globally there is a greater perception of risk, due to the increase in the number of coronavirus cases.

For its part, in Poland the government announced new restrictions on restaurants and public events, after 726 new cases were reported in one day.

The peso, employment, and precious metals

On the other hand, in the United States, initial jobless claims for the week ended August 1 were 1,186 million, decreasing 249 thousand compared to the previous week, although accumulating 20 consecutive weeks above one million.

On the other hand, continuous applications, which are people who are already receiving unemployment support or who continue to wait to receive it, stood at 16,107 million.

Given the increased perception of risk, the price of gold advanced 1.07% and a few moments ago reached a new all-time high of 2,060.27 dollars per ounce, as a result of the higher perception of risk in the financial markets and the expectation of monetary stimuli and low rates. interest for a prolonged period of time, which increases the attractiveness of gold as an investment medium and store of value.

The nervousness of the financial markets is also observed in the capital market of Europe, where the main indexes lose on average about 1.3%, while, in the futures market, the main indexes in the United States point to an opening with losses close to 0.30%.

Regarding economic indicators, this morning the gross fixed investment (IFB) for the month of May was published in Mexico, registering a monthly drop of 4.46% and an annual drop of 38.41% according to figures adjusted for seasonality.

The annual fall of the IFB was the deepest since August 1995, when it registered a decline of 41.14%. So far this year, the IFB accumulates an average annual contraction of 21.16%, taking the investment index to 63.81 points, its lowest level since July 1997.

Within the IFB, investment in machinery and equipment showed a monthly contraction of 9.52%, deeper than the fall in total investment. This is equivalent to an annual decline of 43.76%, not seen since June 1995 and the third largest on record.

For its part, the IFB under construction contracted only 0.51% per month (then fell 30.84% ​​per month in April), registering an annual decline of 33.14 percent.

The Monthly Indicator of Private Consumption in the Internal Market for the month of May showed a monthly drop of 1.7% and 23.5% compared to May 2019.

Within the indicator, there are falls in the consumption of goods, at 1.4% monthly and 21.5% annually, while in services the falls are 1.3% annual and 23.4% annual.

Regarding the consumption of imported goods, the monthly drop was 6.7% and 33.8% annually, since this item continues to be affected by the depreciation of the peso.

Consumption is expected to have started the recovery process by June, especially in national goods and services, since on the first day of the month the social distancing measures were lifted and the economy reopened.

Given this, it is probable that a monthly increase will be shown, but on an annual basis, a double-digit fall is still expected due to the impact on employment in Mexico.

In Mexico, the administrative record of the automotive industry for July was published, which showed a total sale of light vehicles of 72,897 units per month, equivalent to an increase of 16.01% per month and -31.39% compared to July 2019. 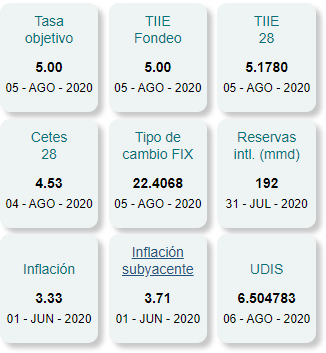 For its part, production managed to normalize, by manufacturing 294,946 units, which is equivalent to an annual increase of 0.65%, the first since the pandemic began.

Likewise, exports registered levels similar to those observed at the beginning of the year, with 256,098 vehicles, equivalent to an annual fall of 5.47%. The above shows that the normalization of car production in Mexico is driven by the external sector.

During the session, the exchange rate is expected to trade between 22.35 and 22.70 pesos per dollar. The euro starts the session with a moderate appreciation of 0.10%, trading at 1.1851 dollars per euro, while the pound appreciates 0.37% and is trading at 1.3163 dollars per pound.

To hedge against a depreciation of the peso beyond 23 pesos per dollar, a purchase option (call), with an exercise date within 1 month has a premium of 1.14% and represents the right but not the obligation to buy dollars in the level mentioned above.