The peso begins the session with a depreciation of 0.15% or 3.3 cents, trading around 22.41 pesos per dollar, before a generalized strengthening of the US dollar against its main crosses.

However, the advance of the dollar is not the result of a greater perception of risk and is due to Donald Trump’s decision to sign four executive orders last Saturday, after an agreement was not reached to extend fiscal stimulus in Congress.

The executive orders are: 1) authorization for companies to defer payroll taxes for citizens who earn less than $ 100,000 per year, from September 1 to December 31, 2020; 2) authorization for states to pay $ 400 a week as an additional benefit of unemployment insurance, although the federal government will only finance 75% of the amount; 3) funds from the Department of the Treasury and Housing and Urban Development, to provide financial assistance to tenants and homeowners struggling to pay their monthly rents or mortgages and 4) the extension of the moratorium on student loans included in the CARES Act., from September 30 to December 31.

This has generated optimism in other financial markets such as capital markets, where the main European indices show average gains close to 0.50 percent.

In the futures market, the main indices of the United States also show advances close to 0.25 percent.

For its part, in the commodities market the price of oil extends its gains this morning, with the WTI advancing 1.36% to 41.78 dollars per barrel, which is due to Trump’s executive orders and the oil company Saudi Aramco, He pointed out that there is a clear recovery in demand for energy, particularly in Asia where demand is already close to pre-crisis levels.

For its part, the price of gold shows a moderate decline for the second consecutive session, dropping 0.26% to 2,030.29 dollars per barrel, as a result of the strengthening of the dollar and optimism in the markets.

In the basket of main crosses, the most depreciated currencies are the South African rand which lost 0.70%, the Turkish lira with 0.58%, the Swiss franc with 0.58%, the Danish krone with 0.30% and the euro with 0.29%, without note higher demand for safe haven currencies.

The week that begins in Mexico highlights the monetary policy decision of Banco de México on Thursday, August 13 at 1:00 p.m., where Banco Base maintains the expectation of a cut in the interest rate of 50 basis points to 4.50 percent.

It should be noted that, although year-on-year inflation has risen to 3.62% in July, there are still broad downside risks to economic growth, widening the slack in the economy.

Regarding economic indicators this morning, in Mexico the survey of international travelers published by INEGI, showed that in June 2 million 426,612 visitors entered the country, of which 981,385 were international tourists (the rest being excursionists), growing 1.7% and 10.2 %, respectively, with respect to the month of May, However, the rates are not unusual for a month of June, since it coincides with the beginning of the holiday period.

Despite this monthly increase, at an annual rate the number of visitors that Mexico received in the month was 68.9% in the case of international visits. 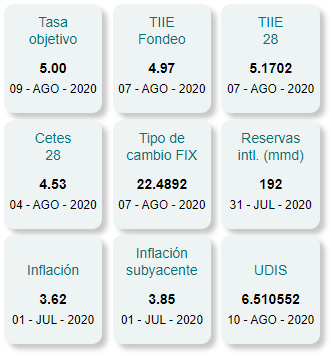 On the other hand, the Monthly Indicator of Industrial Activity by Federal Entity (IMAIEF) was published for April, which showed a monthly contraction in 31 of the 32 states of the country.

Tabasco was the only one that presented a growth of 18.30% in relation to March, adding 6 consecutive advances.

The opposite dynamic in economic activity in this state to the rest of the country could be related to greater public investment. While, the states with the greatest monthly setbacks were: Puebla (-49.15%), Guanajuato (39.02%) and San Luis Potosí (38.36%), states that are characterized by the strong presence of the automotive industry, an activity that was suspended during all April to be classified as non-essential. It should be remembered that the Global Indicator of Economic Activity (IGAE) of the industrial sector for April, contracted at a monthly rate of 25.2 percent.

To hedge against a depreciation of the peso beyond 23 pesos per dollar, a purchase option (call), with an exercise date within 1 month has a premium of 1.53% and represents the right but not the obligation to buy dollars in the aforementioned level.