The peso starts the session with a depreciation of 0.24%, or 5.2 cents, trading around 21.96 pesos per dollar, when a mixed performance is observed in the exchange market.

Other currencies that are losing ground are the Brazilian real with 0.52%, the euro with 0.35% and the Danish krone with 0.34%. In contrast, the South African rand advanced 0.48% and the New Zealand dollar 0.18 percent.

Because there is no pattern in the performance of currencies, the depreciation of the peso this morning is not attributable to a higher perception of risk.

The global capital markets also show a mixed performance without a defined trend, while the futures market points to moderate losses in the main US indices, after reaching new all-time highs yesterday.

In the commodities market, the WTI shows a decline of 0.53%, trading around 43.22 dollars per barrel.

The National Hurricane Center of the United States reported that Hurricane Laura is strengthening and is close to becoming category 4, so it is likely to cause damage and flooding when it makes landfall in Texas, also passing through Louisiana and Mississippi.

This could cause some oil refineries to remain closed for months, generating a drop in oil supply and therefore upward pressure on the price of oil.

The peso and GDP

During the session, the publication of Banco de México’s quarterly inflation report around noon will be key in Mexico, where it is expected that the economic growth forecasts for 2020 will be adjusted downwards.

Likewise, it will be relevant to know the pace at which Banco de México anticipates the economic recovery of 2021.

Regarding economic indicators, this morning the Global Economic Activity Indicator (IGAE) corresponding to the month of June was published, which showed a recovery of 8.9% compared to the previous month according to figures adjusted for seasonality, being the first month with a monthly growth rate greater than zero since July 2019. In annual terms, the indicator contracted 14.5 percent.

The recovery is mainly due to a rebound in secondary activity of 17.9% in the month, this due to the fact that the day of healthy distance ended in June, which allowed companies to resume their economic activities.

However, in annual terms, the secondary sector continues to be the most affected, with an annual drop of 17.5%, due to the fact that the companies in the sector were the ones that most rigorously implemented contingency measures in April and May.

It should be noted that the monthly recovery was mainly due to the manufacturing sector, which advanced 26.7% compared to the previous month, although it still registers an annual decline of 18.3 percent.

The June increase in the IGAE is evidence that the recession has already bottomed out. However, this does not imply that the crisis is over, since economic indicators still show significant annual falls.

The tertiary sector also showed a recovery, although of lesser magnitude, growing 6.2% compared to the previous month, showing an annual fall of 13.6 percent.

In the interior, the greatest recovery was observed in wholesale trade, increasing 26.3% monthly, while retail trade advanced 18.82% monthly.

In contrast, professional, scientific and technical services, as well as business support services showed a monthly drop of 6.5%, after showing moderate setbacks in previous months, evidence that companies are seeking efficiencies in the face of the recession.

Temporary accommodation and food preparation services recovered 7.6% monthly, the first advance since November 2019, although it still shows a strong annual drop of 68.8%, as it is one of the sectors whose recovery depends on the passage of the pandemic.

It is worth mentioning that the primary sector was the least affected by the pandemic, and the previous month had already had a slight expansion.

The figure confirms a historic drop for a quarter. For purposes of comparison with the United States, where the figures are annualized, the contraction in Mexico was 52.66 percent.

It is worth mentioning that the revision of the GDP for the second quarter in the United States will be released tomorrow. It should be noted that the vast majority of the countries registered severe falls during 2Q 2020, Mexico registering the third largest, only below the United Kingdom (-21.7% annually) and Spain (-22.1% annually).

In the interior, primary activities registered a negative quarterly variation of 2.03% and 0.18% annually.

For its part, the most severe falls are concentrated in the secondary sector, with contractions of 23.44% quarterly and 25.68% annually, dragged down by the quarterly decline in the construction industry with 31.01% and the manufacturing sector with 26.41% derived from the suspension plant operations to contain the pandemic.

Finally, tertiary activities showed a contraction of 15.08% quarterly and 16.21% annually, affected by the quarterly collapse of cultural and sports recreation services (72.82%) and temporary accommodation services (67.52 percent). 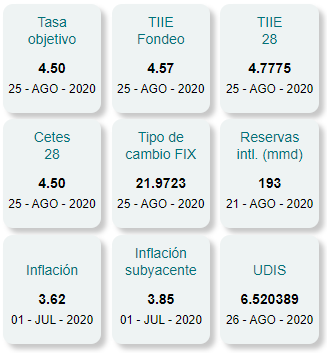 Despite the fact that a rebound effect was observed in some sectors in June and at the beginning of the third quarter, the prolongation of the containment measures keeps some sectors depressed, such as the services sector.

In this sense, Banco BASE anticipates an average annual contraction of GDP in 2020 of 9.5 percent.

To hedge against a depreciation of the peso beyond 22.50 pesos per dollar, a purchase option (call), with an exercise date within 1 month has a premium of 1.34% and represents the right but not the obligation to buy dollars in the aforementioned level.