Like the peso, other currencies show a correction, such as the rand that depreciates 0.70%, the Japanese yen with 0.55%, the South Korean won with 0.29% or the British pound with 0.24 percent.

It is important to note that the depreciation of the peso is not the result of a greater perception of risk, since at the global level financial markets show a positive performance consistent with a greater appetite for risk, given the expectation that the global economy will continue its recovery and that central banks maintain a highly accommodative monetary stance.

Capital markets show moderate gains in Europe, with average advances close to 0.35%, while in the United States the futures market indicates that the main indices could start with an advance of 0.20%, reaching new all-time highs at the beginning of the week .

For their part, the main oil blends start the day with large gains and the economic recovery in China is expected to continue.

In China, the non-manufacturing indicator rose to 55.2 from 54.2 since July, which indicates the Asian giant continues to recover after the fall in the first quarter due to the economic and monetary support of the country.

This led the WTI price to start the session trading at $ 43.43 per barrel, which is equivalent to an increase in its price of 1.07%. Metals also registered gains this morning, mainly industrial ones, such as aluminum, which advanced 1.07%, steel with 1.21% and copper with 0.69 percent.

It should be noted that the global economy continues to face the risk of the coronavirus, although it has been more concentrated in emerging economies. India is becoming the new epicenter of the pandemic, due to the rapid increase in daily cases that it has reported in recent days.

On Sunday it registered 78,761 cases, a new record in registration for any country and, if it follows this path, it would surpass Brazil in the number of cases in a matter of weeks and the United States in a couple of months.

For now, India has already replaced Mexico as the third country with the highest number of registered deaths, at 64,646 people.

On the other hand, in Mexico Arturo Herrera, Secretary of the Treasury, informed at a meeting that the budget for next year will be tighter, because the government wants to curb the debt due to the depreciation of the peso during 2020.

On the side of the placement of bonds, he reported that there is not much space to continue issuing them, since the debt as a percentage of GDP grew close to 10% due to the weakness of the peso. 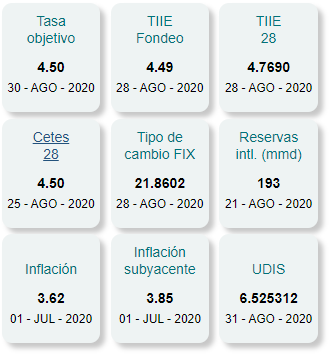 Therefore, Herrera expects the government to send a budget for 2021 “cautious, prudent and responsible,” which must be presented no later than September 8. This sends the signal that the government is not considering the implementation of countercyclical fiscal measures to accelerate the economic recovery in 2021.

To hedge against a depreciation of the peso beyond 22.50 pesos per dollar, a purchase option (call), with an exercise date within 1 month has a premium of 1.21% and represents the right but not the obligation to buy dollars in the aforementioned level.