The peso begins the session with a depreciation of 0.33% or 6.7 cents, trading around 20.10 pesos per dollar, in a correction to Tuesday’s earnings, when a greater appetite for risk was observed.

The correction occurs for most currencies in the broad basket of major crosses, with the South African rand being the most depreciated currency with 1.12%, followed by the Norwegian krone with a depreciation of 0.96 percent.

It should be remembered that yesterday, most financial markets reacted with optimism, after, in the United States, a bipartisan group of legislators (Republicans and Democrats) proposed a stimulus package of $ 908 billion, which revived speculation on the likely approval of a new fiscal support package.

It should be added that, yesterday afternoon, Nancy Pelosi presented a new proposal to Steven Mnuchin, but no details were released. During her appearance before the Banking Committee in the Senate, Mnuchin indicated that she is pressing Congress to approve new stimuli.

A moderate correction is also observed in capital markets, with the main indices in Asia showing no significant changes, while in Europe, the main indices lose on average about 0.50 percent.

In the US futures market, the S&P 500 and the Nasdaq will probably start with a decline close to 0.40%, after both indices reached new all-time highs yesterday.

The peso and vaccine

It is important to mention that today’s news related to the coronavirus is mainly positive. The UK approved the use of the Covid19 vaccine from Pfizer and BioNTech.

The British government has requested 20 million doses of these pharmaceutical companies, enough to vaccinate a third of the total population.

In the United States, the Food and Drug Administration (FDA) is expected to meet on December 10 to discuss the clinical results of Pfizer’s vaccine.

On the other hand, Anthony Fauci, chief physician of the National Institute of Allergy and Infectious Diseases, indicated that the majority of Americans could be vaccinated in the second quarter of 2021, achieving a herd immunity by the fall.

It should be added that yesterday it was announced in the media that Mexico will benefit from this year’s oil coverage with about 2.5 billion dollars, according to people with knowledge of the subject, as they are not official data, since the price of put options and hedged volume are confidential.

The benefit of the hedges, released in the media, represents approximately 0.23% of GDP with data for the third quarter and an average exchange rate of 21.60 pesos per dollar in the year.

Regarding economic indicators, in the United States, the Automatic Data Processing (ADP) employment survey estimated that 307,000 job positions were created during November, below the 475,000 expected by the market.

This week the publication of the applications for unemployment support from last week, which is published on Thursday, will be key, as increases have been observed for two consecutive weeks.

For its part, the non-agricultural payroll for November will be published on Friday, where the creation of about 490 thousand job positions is expected to be confirmed.

In Mexico, the System of Composite Indicators: Coincident and Advanced (SICCA) was published.

The coincident indicator for September was at a level of 95.4 points, which represented a monthly increase of 0.85%, after advancing 2.60% in August. Under this approach, the economy confirms four months in the recovery stage, which began in June.

On the other hand, the total sale to the public of light vehicles for November was announced, where sales amounted to 95,485 units, representing an annual contraction of 23.5% (Vs. -21.3% in October), reflecting that the recovery has been stagnant.

Car sales in Mexico represent the lowest level for the same month of November since 2012. 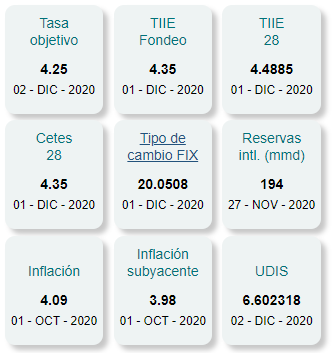 The rest of the automotive indicators (production and export) will be released on Friday, December 4.

To hedge against a depreciation of the peso beyond 20.50 pesos per dollar, a purchase option (call), with an exercise date within 1 month has a premium of 1.43% and represents the right but not the obligation to buy dollars in the aforementioned level.