The peso closed the session with a depreciation of 1.58% or 35.2 cents, trading around 22.63 pesos per dollar, hitting a maximum of 22.7000 pesos per dollar, ranking as the second most depreciated currency in the exchange market behind the Brazilian real that it lost 1.84% when closing at 5.32 reais per dollar.

Along with the peso, most currencies closed the session with losses as a result of an upward correction in the US dollar, after the dollar-weighted index fell 3.34% in July, a drop not seen since January 2018 and the sixth largest monthly decline in record since 2004.

The dollar-weighted index closed the session with an increase of 1.72 percent.

The movement of the exchange rate during the session is relevant, since from the technical point of view, it seems to be giving a bullish break, by forcefully drilling the resistance marked by the 50-day moving average that stands at 22.35 pesos per dollar.

If the upward momentum of the exchange rate continues, it could reach the key level of 23.00 pesos per dollar in the coming days and then the 100-day moving average at 23.16 pesos per dollar.

Unlike capital markets that posted gains in Europe and the United States as a result of speculation and highly accommodative positions by major central banks, currencies lose against the dollar in a complex picture for the real economy.

The pandemic problem is far from being solved and the global economic recovery is likely to be slow, mainly affecting emerging economies.

The peso and remittances

Regarding economic indicators, during the session relevant data for Mexico was published.

Remittances in June continued to advance for the second consecutive month, registering a flow of 3,536.98 million dollars, equivalent to an increase of 4.66% monthly and 11.10 annual.

In the accumulated of the year, remittance income amounts to 19,074.92 million dollars, this represents a historical maximum for the same period and an increase of 10.55% compared to the same period last year.

In local currency, at an average exchange rate of 22.3187 pesos per dollar in June, remittances totaled 78,740.85 million pesos, showing an annual advance of 28.54 percent.

For its part, the IMEF manufacturing indicator for July showed an increase of 5.07 units in relation to June, to stand at 48.14 points, the best level since January of this year, but accumulating 14 months below the expansion threshold.

Inside, the only one of five components that showed a decline was the product delivery, down 0.86 units.

On the other hand, the other four components showed an increase, standing out the one of new orders (+10.88 points) and production (+8.31 points), supported by the advances of the manufacturing sector in the United States, which have been expanding since June.

Likewise, the increase in the new jobs component stands out, which stood at 46.97 units (+5.13 points), recovering the ground lost by the effect of the pandemic in April.

On the other hand, the IMEF non-manufacturing indicator stood at a level of 46.98 points, accumulating 7 months in contraction. 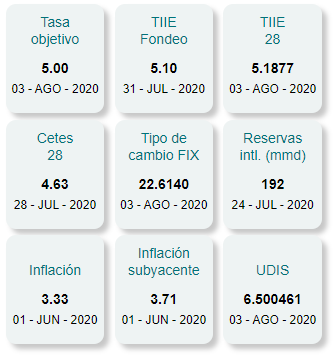