The peso begins the session with a depreciation of 1.23% or 26.5 cents, trading around 21.87 pesos per dollar, as a generalized strengthening of the US dollar is observed, as a result of an increase in the perception of risk in global financial markets.

It should be noted that the dollar weighted index starts with an advance of 0.35% and accumulates a gain of 0.96% since the beginning of the month.

The nervousness of the markets is mainly due to the fact that President Donald Trump said that he intends to slow down the economic relationship with China.

The US executive mentioned the importance of manufacturing its own supplies in his country, for which he mentioned the possibility of imposing a tariff on companies that create jobs in China and other countries.

“If they can’t make it here, then let them pay a big tax to build it somewhere else and send it to our country.” For its part, the United States Congress returned today from its recess, so it is expected that negotiations on the new stimulus package will continue.

However, the proximity of the presidential elections could make an agreement difficult, due to the differences between the two parties.

In the foreign exchange market, the greatest losses are observed in currencies of emerging economies or countries that produce raw materials, such as the South African rand, which lost 1.15%, the Norwegian krone, with 1.14%, or the Brazilian real, which depreciated 1.04%. Due to the reappearance of doubts about the future of the economic reactivation, the prices of raw materials show wide falls, mainly energy.

The peso and fuels

The price of WTI shows a decline of 6.44%, trading at 37.21 dollars per barrel, showing a fall of 14.08% in the last eight sessions. Part of the drop in oil prices is due to the end of the summer season in which an increase in demand for fuels is normally observed.

Likewise, the market continues to absorb the impact of Saudi Arabia’s decision to reduce the sale price of crude oil to Asian buyers.

With the return of liquidity to the financial markets, it is probable that falls in the capital markets will be observed during the American session. 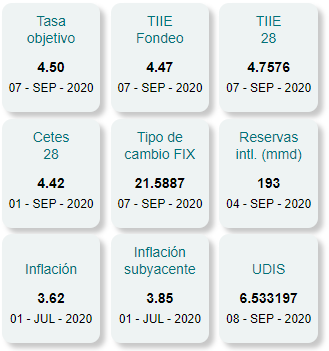 In the futures market, the major US indices are likely to start with pullbacks.

The Dow Jones is targeting an open 0.50% down, the Dow Jones down 1.50% and the Nasdaq down 3.40%. Losses are expected to be concentrated in broadcasters in the technology sector.

Regarding economic indicators, in Mexico the Monthly Indicator of Industrial Activity by Federal Entity (IMAIEF) was published for May, which showed a monthly contraction in 17 of the 32 states of the country.

The largest monthly setbacks were observed in Morelos (20.24%), Yucatán (17.84%) and Baja California Sur (11.84%). In contrast, the states with the greatest advances were Baja California (9.07%), San Luis Potosí (7.28%) and Tamaulipas (7.03%), where the first was driven by the generation and transmission of electricity and the last two by the manufacturing industry.

It should be remembered that some manufacturing sectors were classified as essential in mid-May, such is the case of the automotive industry. In annual terms, Tabasco was the only state that grew (14.79%), which could be associated with Federal Government projects in that entity.

It is important to mention that today at 5:00 p.m. the federal government will formally present the 2021 Economic Package in the Chamber of Deputies, where it is expected that priority will be given to fiscal austerity despite the economic crisis.

To hedge against a depreciation of the peso beyond 22.5 pesos per dollar, a purchase option (call), with an exercise date within 1 month has a premium of 1.24% and represents the right but not the obligation to buy dollars in the aforementioned level.