In the foreign exchange market, currencies show a mixed behavior, as market participants are waiting for the participation of Fed Chairman Jerome Powell in the Jackson Hole monetary policy symposium.

In the futures market, the main indices of the United States suggest that they will open with moderate losses close to 0.25 percent.

On the other hand, Hurricane Laura made landfall early this morning. Forecasts indicate that it could cause damage and flooding, with winds higher than those caused by Hurricane Harvey in 2017.

More than 20% of the oil refining capacity in the United States is within the possible path of the hurricane, which is why not only oil production decreases, but its transformation.

Therefore, the price of WTI starts the session with a 0.76% decline, trading at 43.06 dollars per barrel, as pessimistic comments are expected from Jerome Powell at the Jackson Hole symposium.

It is important to mention that the hurricane is expected to cause damage to the platforms and refineries, which could remain closed for several weeks if damage is reported.

Globally, the risk of the coronavirus continues to be faced, with 24 million confirmed cases and significant increases in India, South Korea and several European countries.

The government of France announced that they are prepared to implement a new national lockdown to contain the resurgence of cases. For its part, in India, the second most populated country in the world, there were 75,760 new cases in one day, a new maximum in record, with a total of 3.3 million infected.

If the trend remains, the country is likely to become the second with the highest number of cases, a position currently held by Brazil.

Due to this, the government of that country is expected to implement new contingency measures, mainly the 14-day quarantine for travelers coming from high-risk areas.

Regarding economic indicators, in the United States the applications for unemployment benefits for the week ended on August 22 stood at 1,006 million, decreasing by 98 thousand compared to last week.

Initial applications for unemployment support have accumulated 22 weeks above a million since the pandemic began in March.

On the other hand, the continuous applications for unemployment support, of those people who are already receiving support or continue to wait, decreased from 14,844 million to 14,535 million.

On the other hand, the second review of the United States GDP showed that the economy shrank at an annualized quarterly rate of 31.7%, slightly less than the previously estimated contraction of 32.9 percent.

For its part, in Mexico, the trade balance for the month of July registered a surplus of 5,798,685 million dollars (million dollars), being the second consecutive historical surplus according to original figures.

The foregoing, as a result of a greater strength in foreign demand over domestic demand.

On the one hand, exports showed a moderate advance of 9.81% per month, compared to the rebound in the previous month of 75.73% per month, according to seasonally adjusted figures.

In annual terms, exports show a drop of 8.82%. Exports were driven by the manufacturing sector, which showed a monthly increase of 11.87%, supported by the 39.02% advance of the automotive sector. 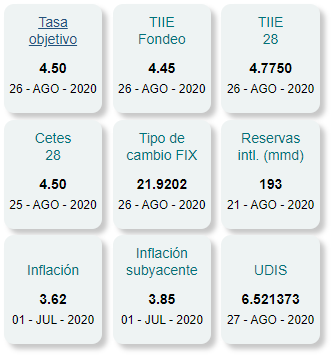 On the contrary, imports increased 3.19% monthly and contracted 26.27% in annual terms, evidence of the weakness of the domestic market.

In the first seven months of the year, the Trade Balance registered a surplus of 8,457.75 million dollars, which represents an increase of 334.79% in relation to the same period of the previous year.

During the session, the exchange rate is expected to trade between 21.85 and 22.10 pesos per dollar. The euro starts the session with a moderate appreciation of 0.06%, trading at 1.1837 dollars per euro, while the pound depreciates at 0.08% and is trading at 1.3220 dollars per pound.

The peso and money market and debt

To hedge against a depreciation of the peso beyond 22.50 pesos per dollar, a purchase option (call), with an exercise date within 1 month, has a premium of 1.37% and represents the right but not the obligation to buy dollars in the aforementioned level.