The peso closed the session with a depreciation of 0.91% or 20 cents, trading around 22.18 pesos per dollar, falling along with other currencies of emerging economies, mainly the Brazilian real, which lost 1.54% and closed at 5.5060 reais per dollar, being the worst performing currency during the session.

The weakness of the real is due to an internal dispute between President Jair Bolsonaro, who seeks to raise debt to increase public spending, and the Minister of Economy, Paulo Guedes, who opposes raising debt levels.

According to Bolsonaro’s comments, there is the possibility that Guedes will be removed from his post, which generates nervousness among market participants, especially since the minister is considered one of the strengths of the current administration.

Along with the fall of the Brazilian real, other currencies also lost ground, such as the Russian ruble which depreciated 1.10%, the Mexican peso, the Chilean peso with 0.82% and the South African rand with 0.74 percent.

It is important to note that the weakness against the dollar was limited to a few currencies, as most of the main crosses showed an advance.

In the session, the dollar weighted index registered a fall of 0.24%, accumulating four sessions down, mainly due to the appreciation of currencies such as the Australian dollar with 0.68%, the Japanese yen with 0.58%, the Canadian dollar with 0.55% and the euro with 0.25 percent.

The peso and investment

It should be added that this weekend, the Ministry of Economy reported that during 2Q 2020, Mexico captured 6,595.8 million dollars (mdd) of Foreign Direct Investment (FDI), which represents an annual growth of 15.65% compared to preliminary figures from 2Q 2019.

Of the total FDI, reinvestment of profits represented 53.5%, new investments 16.9% and accounts between companies 29.6%.

By sector: manufacturing captured the vast majority of flows, representing 43.2% of total FDI. In the accumulated of the first semester of the year, they entered 17,969 million dollars in FDI, 0.74% lower in relation to the preliminary figures of the same period of 2019. 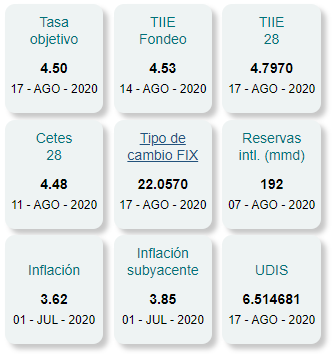 The FDI report for the first semester did not have an observable effect on the foreign exchange market.