The peso starts the session with a depreciation of 0.66% or 13.3 cents, trading around 20.14 pesos per dollar and touching a maximum of 20.1934 pesos, losing for the third consecutive session and accumulating a weekly decline of 1.91% or 38 cents, the fourth being currency most depreciated in the session.

It is worth mentioning that the peso is shaping up to be the second most depreciated currency in the week, only behind the pound sterling, which accumulates a decline of 2.15%, given the possibility that the United Kingdom will leave the European Union without a trade agreement .

The depreciation of the peso this morning is due to an increase in the perception of risk in global financial markets that has increased the demand for dollars as a safe haven asset.

The dollar weighted index shows an advance in the session of 0.27%, the highest since November 9.

The strengthening of the dollar occurred after the president of the European Commission, Ursula von der Leyen, indicated that it is most likely that a trade agreement with the United Kingdom will not be reached.

Also, Boris Johnson, warned British companies to prepare for the “strong possibility” of a no-deal split.

The talks between the two parties will continue over the weekend, so there could still be a further increase in risk perception if it is confirmed that there will be no agreement.

The pound sterling shows a depreciation in the session of 2.15%, trading at 1.3152 dollars per pound.

Another factor that also contributes to the perception of risk in financial markets is that in the United States there are no signs of progress towards an agreement between Democrats and Republicans to approve a new stimulus package in the short term.

Republican Leader Mitch McConnell continues to push for aid to state and local governments to be withdrawn, while Nancy Pelosi resists, causing talks in Congress to stall again.

Finally, the coronavirus continues to advance in Europe, because in Germany, a new record of daily deaths from Covid19 was registered, with 604 deaths in the last 24 hours. Chancellor Angela Merkel and the authorities of the German states are expected to meet on Sunday to discuss the measures that will be applied from December 19, including the closure of non-essential businesses and the extension of school holidays.

In Europe, the main capital market indices show losses close to 1.10%, while in Germany the DAX registers a 1.54% drop, due to the possibility that new containment measures will be implemented that affect economic activity during the last weeks of the year and the first weeks of 2021.

On the other hand, Senator Ricardo Monreal, proposed an initiative to regulate and supervise the interest rates offered by banks, in order to promote financial inclusion.

The senator explained that the credits granted through cards, mortgages and other instruments are far from the benchmark rate of Banxico, making access difficult.

Monreal indicated that currently 42.9% of the Mexican population does not have access to credit, 31% of the adult population has a formal credit and 38.6% has at least one informal credit.

Although they talk about commercial bank rates, this may also end up having an impact on monetary policy, since the Banco de México rate is the reference rate for the economy and by imposing rate controls, the reference would be manipulated.

Also by controlling rates, the most likely effect would be a decrease in the supply of credit and, consequently, a decrease in access to credit and some financial services. That is, an effect contrary to what is sought.

In Mexico, the Monthly Industrial Activity Indicator (IMAI) for October was published, which recovered strength by showing a monthly increase of 1.95%, after presenting a moderate growth the previous month, growing 0.61%.

With this, the IMAI adds five months in recovery, accumulating an increase of 34.18% from its minimum level in May.

At an annual rate, industrial activity was 3.14% below that observed in October 2019. Within the indicator, the four components registered monthly increases, highlighting the 3.64% advance in construction, after falling 5.14% in September; followed by an increase in manufacturing activity of 1.76%, an activity that is close to reaching a full recovery, since at the annual rate the contraction is only 0.98 percent.

The good performance of manufacturing is largely due to greater dynamism in external demand, which has been reflected in the Trade Balance, where manufacturing exports for October registered an annual increase of 7.29%. Finally, mining and electricity generation advanced at monthly rates of 1.0% and 1.76%, respectively.

To hedge against a depreciation of the peso beyond 20.50 pesos per dollar, a purchase option (call), with an exercise date within 1 month has a premium of 1.63% and represents the right but not the obligation to buy dollars in the aforementioned level. 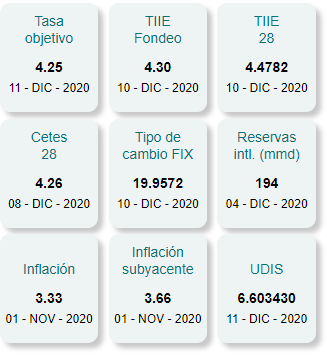