It should be noted that last week the peso depreciated 1.84% or 36.4 cents, due to an increase in the perception of risk with respect to Mexico, after the Senate advanced the reform of the Bank of Mexico Law that sought to force the Bank Central to being a buyer of dollars of last resort.

This week, the postponement of the discussion and vote on the reform in Tuesday’s session and the probability that a bicameral commission will be installed to review the reform in January and February, reduced the perception of risk about Mexico, allowing the exchange rate resume its downward trend, although without piercing the key support of 19.70 pesos per dollar.

In addition to the lower perception of relative risk in Mexico, there was optimism in global financial markets, due to the expectation that new fiscal stimuli will be approved in the United States in the short term. Given this, the dollar weighted index showed a decline of 0.85%, as the demand for dollars as a refuge decreased.

It is worth mentioning that, towards the end of the week, the attention of Congress in the United States focused on the approval of a spending law that allows the government to continue operating normally until September of the following year and it is likely that this will be approved by the end of week.

For this reason, the following week is expected to continue the discussion for the approval of the new stimulus package.

It should be noted that, in the week, the last monetary policy announcement of the Federal Reserve was carried out in the year, where the interest rate in a range of 0 to 0.25% and the program of injections of liquidity.

However, the accommodative stance was reiterated, since they plan to keep the interest rate at a minimum level, at least until 2023, despite the fact that economic projections improved, adjusting up the expectation of economic contraction for 2020 to 2.4% and the growth expectation in 2021 to 4.2%. This also allowed the depreciation of the US dollar.

The following week it is likely that a decrease in the volume of foreign exchange market operations will be observed, mainly in the session of December 24.

For the markets, the approval of the new stimulus package in the United States and the evolution in the number of infected and deaths from Covid-19, which continues to advance at a record rate in several countries, will be key. 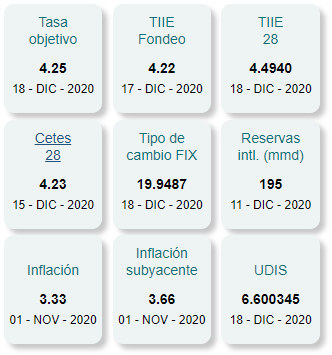