The peso closed the session with a moderate appreciation of 0.32% or 7 cents, trading around 21.71 pesos per dollar, after losing ground during the morning, reaching a price of 21.8927 pesos.

Along with the peso, other currencies of emerging economies gained ground, such as the Brazilian real, which appreciated 0.87% and closed as the currency with the best performance in the exchange market, the Colombian peso with 0.64% and the Chilean peso with 0.05%. hundred.

The advance of the the peso was probably related to the recovery of the real, after the president of the Central Bank of Brazil pointed out that it is important to resume fiscal austerity as of the following year, arguing that growth driven by public spending is a formula which has not been successful in the country.

This reduces concerns about disorderly growth in public spending.

For his part, the president of the Central Bank also pointed out that the Brazilian economy could contract 5% during the year, a drop less than expected by other emerging economies.

It should be noted that yesterday, Tuesday, the economic growth of Brazil was published for the second quarter, showing a quarterly decline of 9.7% and an annual decrease of 11.4%, lower falls than those registered in Mexico whose GDP contracted 17.1% quarterly and 18.7% annually. 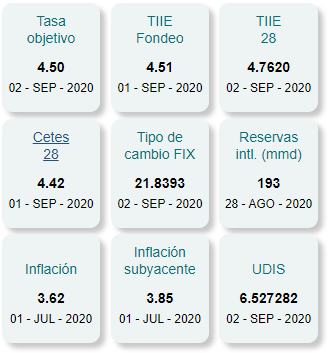 Optimism about emerging economies was limited to the currency market, since in the capital market the CPI of the Mexican Stock Exchange registered a decline of 1.16%, while in Brazil the IBOVESPA lost 0.25 percent.

In contrast, the main indices in the US capital market reached new all-time highs. The S&P 500 posted a 154% advance, while the Nasdaq advanced 0.98 percent.

In the rest of the foreign exchange market, most currencies lost ground to a strengthening of the dollar against most of its main crosses. The currency weighted index advanced 0.24%, in a partial correction to losses from previous weeks.

The most affected currencies were the Norwegian krone with a fall of 1.04%, the South African rand with 0.97% and the euro with 0.52 percent.