For the second consecutive session, the peso’s appreciation occurred alongside other currencies of emerging economies, such as the Brazilian real, which rose 1.17% and the South African rand, which appreciated 0.42%. The appreciation of the peso was mainly due to two factors:

Positive economic indicators were published in the United States, with applications for unemployment support reaching 881 thousand during the previous week, its lowest level since March, a sign of a gradual recovery in the labor market.

Likewise, the US trade balance as of July confirmed Mexico as its main trading partner.

In summary, economic data show that US economic activity continues to recover and that Mexico will be one of the main countries benefiting from this recovery.

It should be added that the rebound in economic activity in the United States could accelerate if an effective vaccine against Covid19 is authorized in the coming months.

The Mexican peso was boosted by the positive performance of other currencies and, for the second consecutive session, the peso was the second most appreciated currency in the foreign exchange market.

Since the beginning of the week, the Brazilian real has been favored by better-than-expected economic growth projections in that country, and by the expectation that it will pursue fiscal austerity during 2021.

The peso and the markets

It is important to mention that most of the currencies registered a depreciation against the dollar, whose weighted index showed an advance of 0.19 percent.

In the foreign exchange market, there was a moderate preference for safe haven currencies such as the Swiss franc, which increased 0.14% and the Japanese yen, which appreciated 0.06%, due to changes in other financial markets, mainly in the capital and commodity markets. cousins.

The falls were concentrated in stocks in the technology sector, which have had the best performance during the pandemic and on which there has been speculation of a possible bubble. 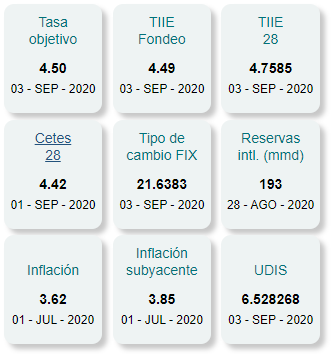 In the commodity market, generalized losses were observed for agricultural commodities, as well as for metals and energy.

From a technical point of view, the Mexican peso continues to respect the 200-day moving average, which currently stands at 21,5082 pesos per dollar and represents an important support for the parity.