The depreciation of the peso was the result of a sustained strengthening of the US dollar, as the perception of risk increased globally. In the session, the Global Risk Perception Base Indicator (PPI) stood at 300 units, which implies perception for high risk.

This happened due to 3 main factors: 1) the return of the protectionist stance of Trump, who said that he intends to slow down the economic relationship with China, and even mentioned the possibility of imposing tariffs on US companies that create jobs abroad. , 2) the expectation that the demand for oil will decrease and 3) a massive sale of assets in the United States.

In the foreign exchange market, losses were observed for most currencies, both emerging and advanced economies, although a negative bias was observed towards the currencies of commodity-producing countries, with currencies such as the Norwegian krone losing 2.06%, the New Zealand dollar losing 1.09%, the South African rand with 1.06% and the Brazilian real with 1.01 percent.

The pound sterling was also among the most depreciated currencies, which lost 1.31% and closed at 1.2993 pounds per dollar, being its biggest drop since March 18.

The depreciation of the pound, which accumulates five sessions down, is due to the aggressive stance of the UK Prime Minister, Boris Johnson, who has threatened to abandon trade negotiations with the European Union derived from Brexit.

In Europe, most of the main indices closed the session with losses on average of over 1%, while, in the United States, the S&P 500 registered a decline of 2.25%, while the Nasdaq lost 4.11%, extending for the third session consecutive losses that have been concentrated in issuers in the technology sector.

In Mexico, the IPC of the Mexican Stock Exchange also registered a decrease of 1.54%, falling in line with other markets.

Finally, the commodity markets also registered strong falls, where the main oil blends stand out, with the WTI falling 6.81% in the session, closing at 37.06 dollars per barrel. 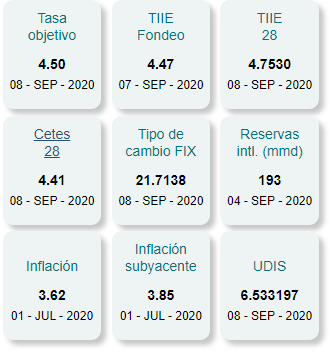 This is due to the conclusion of the summer season, which entails the maintenance of refineries in the United States.

Furthermore, the market continues to absorb the impact of Saudi Arabia’s decision to reduce the sale price of crude to Asian buyers and there are fears that Chinese refineries will not be able to increase their demand for crude.

On the other hand, in the next few hours the Economic Package 2021 will be announced in Mexico, where it is likely that priority will be given to fiscal austerity, despite the economic crisis.

As part of the Economic Package, it would be important that the estimated economic growth does not exceed 3.5%, because for the following year a slow economic recovery is expected for Mexico.