In the foreign exchange market, the peso was the fourth most appreciated currency in the wide basket of main crosses, after the South African rand that appreciated 1.13%, the Czech koruna that advanced 0.55% and the Indian rupee with 0.52 percent.

The appreciation of the Mexican peso was mainly due to three factors:

Positive news was released regarding the distribution of the Covid19 vaccine in the United States.

According to a report from the United States Food and Drug Administration (FDA), the vaccine developed by Pfizer Inc. and BioNTech SE is highly effective in preventing Covid19 and there are no safety issues that prevent authorization for distribution for emergency purposes.

The government agency has not yet given authorization for the distribution of the vaccine in the United States, but it is highly likely that this will happen in the short term.

The possibility of Republican and Democratic lawmakers reaching consensus to pass a broader package of fiscal stimulus.

Senate Republican leader Mitch McConnell said he is willing to compromise on some points on the package that Democrats disagree with, in exchange for them also yielding on points Republicans do not approve of.

This allowed the three main capital market indices in the United States to reach new all-time highs during the session.

The appreciation of the South African rand, which gained 1.13% during the session, with the dollar-rand parity touching a low of 14.9686 rand, its lowest level since February 21.

The strength of the rand is due to the publication of economic growth for the third quarter, which stood at an annualized quarterly rate of 66.1%, beating market expectations of 54.4 percent.

At an annual rate, the South African economy continues to show a contraction of 6%, after falling 17.1% in the second quarter.

It should be added that yesterday afternoon, Banco de México announced that it will offer two auctions for 1.5 billion dollars each on December 9 and 14, both with a maturity period of 84 days.

The operations will be carried out with resources from the swap line established with the Federal Reserve on March 19, in order to support the provision of liquidity. 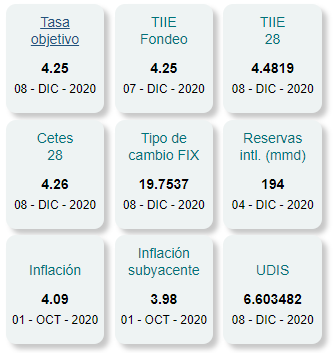 It should be noted that initially the swap line had a duration of six months, but the Federal Reserve extended its validity until March 31, 2021.

From the technical point of view, the exchange rate is likely to try to pierce the support of 19.70 pesos per dollar that was respected during the session.

For now, if the positive news about the probable approval of fiscal stimuli in the United States and about the coronavirus vaccine continues, the door remains open for a drop in the exchange rate to the level of 19.40 pesos per dollar.