The peso starts the session with an appreciation of 0.40% or 8.1 cents, trading around 20.10 pesos per dollar, the result of a general weakening of the US dollar, whose index shows a decline of 0.23 percent.

In the foreign exchange market, most currencies gain ground against the dollar, with the peso becoming the ninth fastest growing currency.

The most appreciated currency is the South African rand with an advance of 1.17%, followed by the Brazilian real with 1.03%, the Chilean peso with 0.85%, the Russian ruble with 0.69%, the Hungarian forint with 0.64% and the Indian rupee with 0.51% , mostly currencies from emerging economies or countries that produce raw materials.

The weakness of the dollar is the consequence of an increase in risk appetite in global financial markets due to the following three factors:

Pfizer and BioNTech, applied for approval for the use of their vaccine in Europe. According to the European Commission, it is likely that the first vaccines will be available by the end of December, as they have 2 billion doses purchased. In the United States, Vice President Mike Pence reported that the distribution of the Covid19 vaccine could begin the third week of December.

In the Eurozone, the final manufacturing PMI data for November was released.

The manufacturing indicator was located at 53.8 slightly above the preliminary data of 53.6 points, although below the October reading of 54.8 points.

Although the PMI decreased from the previous month, the November level still indicates growth.

By countries there is a great divergence, on the one hand, Germany reported the highest PMI in the area with a reading of 57.8 points, while Greece and France registered the lowest levels with 42.3 and 49.6 points respectively.

In a testimony that Powell released this morning, he indicated that, although there are still challenges and uncertainty around the pandemic, the news of the vaccines is very positive for the medium term.

Today the Chairman of the Federal Reserve, Jerome Powell, and the Secretary of the Treasury, Steven Mnuchin, will have an appearance before the Banking Committee in the United States Senate at 9:00 am.

In the capital markets gains are observed, mainly in Asia, where the Nikkei 225 of Japan closed with a gain of 1.34% and the CSI index of Shanghai and Shenzhen with 2.15 percent.

In Europe, the main indices show an average gain of 0.87% and in the United States, the futures market points to an opening with gains close to 1.00 percent.

In the commodities market, oil prices show moderate losses, with the WTI falling 0.55% and trading at 45.10 dollars per barrel.

The weakness of the oil price this morning is due to the fact that this market is attentive to the OPEC + meeting, which was delayed two days, so that the energy ministers have more time to reach an agreement.

Otherwise, oil production would increase in January by at least two million barrels a day, if they maintain the previously defined plan.

There is a wide division in the opinions of the countries, because while some believe that the market is still too fragile to support an increase in oil production, others want to take advantage of the increase in prices to be able to sell more barrels.

The ministers will meet on Thursday, although talks will continue by phone.

Regarding economic indicators, in Mexico, the November Business Confidence Indicator (ICE) for the manufacturing sector was 42.4 points (+0.8 points per month), according to seasonally adjusted figures.

Within manufacturing, the five components contributed to its progress, highlighting the right time to invest with a monthly increase of 1.5 points.

The trade ICE registered a level of 43.3 points (+0.7 points per month), mainly supported by the monthly increase in the component of the country’s economic situation, both present (+1.8 points) and future (+1.0 points).

Construction business confidence stood at 42.9 points (+0.6 points monthly), where the component of the right moment to invest was the one that showed the greatest advance compared to October of 1.0 points.

Finally, in original figures, the ICE of services registered a level of 38.2 points, increasing its annual difference by showing a decrease of 9.2 points (Vs. -8.6 points in October), which could be related to the tightening of restrictions in some states at the beginning of the month. 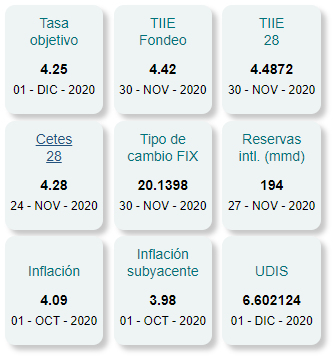 To hedge against a depreciation of the peso beyond 20.50 pesos per dollar, a purchase option (call), with an exercise date within 1 month has a premium of 1.45% and represents the right but not the obligation to buy dollars in the aforementioned level.