The peso closed the session with an appreciation of 0.72% or 16.1 cents, trading around 22.33 pesos per dollar, touching a minimum of 22.2716 pesos and approaching the minimum in the month of 22.1549 pesos, before an increase in risk appetite in the markets financial institutions, after in Europe the main economies of the European Union approved an unprecedented fiscal stimulus of 750 billion euros, a package that is divided into 390 billion euros in grants and 360 billion in low-interest loans.

Optimism continued in the American session after Republican leaders backed a new round of direct stimuli for the population through checks and an extension of the supplementary unemployment benefit that expires at the end of the month, which would amount to a package of 1 billion of dollars.

According to Treasury Secretary Steven Mnuchin, the goal is to approve the stimuli before the end of the following week.

Industrial metals also strengthened in anticipation of a recovery in industrial demand, with copper gaining 0.77%, zinc 2.02%, and nickel 1.74 percent.

Precious metals such as gold also won, because despite optimism, the demand for the metal as a store of value has risen, as expansive fiscal policy measures are interpreted by the market as inflationary.

The most appreciated currencies were those of commodity-producing economies, such as the Brazilian real, which appreciated 2.32% to 5.2088 reais per dollar and the Chilean peso, which advanced 1.73% to 773.61 pesos per dollar. Other currencies that posted strong gains were the South African Rand with a 1.39% advance and the Norwegian Krone with an appreciation of 1.26 percent.

So far this week, market participants have decided to focus their attention on fiscal support measures in Europe and the United States. However, new loss sessions should not be ruled out, as the main problem for the global economy continues to be coronavirus and in the United States some states continue to report growth in cases, such as California, which today reported 9,231 new infections, reaching a total of 400,769 infections. , close to surpassing New York, which in recent months reported a total of 408,000 cases. 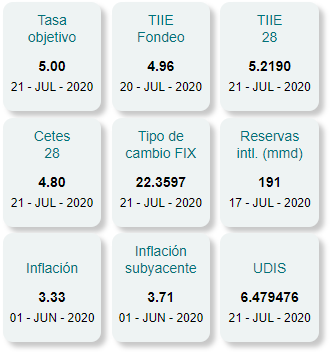