The peso closed the session with an appreciation of 0.25% or 5.5 cents, trading around 22.14 pesos per dollar, as a result of the general weakening of the US dollar that, according to the weighted index, registered a 0.49% drop to a minimum of 1,164.15 points, its lowest level since May 2018.

The weakness of the dollar for the fifth consecutive session is due to the uncertainty about the future of the economic recovery in the United States, as an agreement between Democrats and Republicans to approve a new stimulus package is not yet close, which could happen until September .

Likewise, there are only 11 weeks left until the presidential elections in that country, which raises additional doubts about the policies that will be implemented in the event that the Democratic candidate wins the presidency.

In the session, the Global Risk Perception Base Indicator (PPI) stood at -446 units, which means high risk appetite.

Within the indicator, the components of the foreign exchange, money, commodities and country risk markets showed consistent results with a greater appetite for risk.

The most appreciated currencies during the session were the South African rand with 1.11%, the British pound with 1.05%, the New Zealand dollar with 0.69% and the Brazilian real with 0.68 percent.

The peso and trade war

It is important to note that risks to economic activity persist and episodes of risk aversion in financial markets cannot be ruled out.

On the one hand, tensions between the United States and China continue to rise, after the US Department of Commerce reported that non-US companies will also require special permission to trade US components with the Chinese company Huawei Technologies.

This scheme had already been applied last year for US companies and was implemented as a measure to regulate alleged espionage and data theft on the part of the Chinese technology giant. 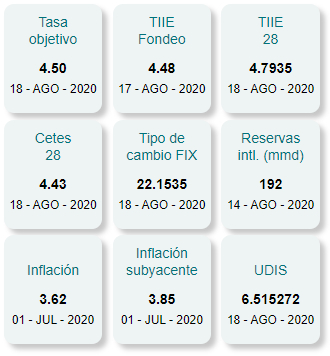 On the other hand, the coronavirus pandemic continues to advance. Although in the United States the states of Florida, California and Texas show a stabilization in the growth of cases, in several European countries restrictions have been tightened to stop the growth of infections, particularly in Ireland, France, the Netherlands, Spain and Germany .