The peso closed the session with an appreciation of 032% or 7.1 cents, trading around 21.93 pesos per dollar, in the face of a generalized strengthening of currencies against the dollar, a sign of a greater appetite for risk among market participants.

The optimism of the markets began overnight, given signs of cooperation in trade between the United States and China, which reduces the risk of an escalation of the trade war.

Among the main crosses of the dollar, the most appreciated currencies were the Brazilian real with 1.55%, the South African rand with 0.79% and the pound sterling with 0.63%. In contrast, the Japanese yen depreciated 0.38 percent.

The appreciation of the peso may also be due to speculation in the market about Banco de México’s monetary policy.

During the morning, a member of the Governing Board told the media that additional cuts to the interest rate are not guaranteed and that the pace of cuts needs to be slower due to inflationary risks.

It should be remembered that the expectation of an accommodative monetary policy tends to depreciate the peso in its price against the dollar.

Another factor that contributed to the strengthening of the peso and other currencies of emerging economies was the increase in oil prices, given the possibility of serious damage to the oil infrastructure of the United States in the Gulf of Mexico.

In the next few hours, Hurricane Laura is expected to rise to category 3. The WTI closed the session with an increase in its price of 1.76%, trading at 43.37 dollars per barrel, while the price of Brent increased by 1.79% and closed trading at $ 45.94 per barrel.

It should be mentioned that not only oil production is affected, but also refining in the region, so the price of gasoline on the New York Mercantile Exchange increased by 1.95% and closed the session trading at 1.39 dollars per gallon .

Capital markets showed a mixed performance. However, optimism was observed in several indices. The S&P 500 registered an advance of 0.36%, reaching a new record high of 3,444.21 points. For its part, in Mexico, the CPI of the Mexican Stock Exchange had a positive session, advancing 0.58% to 38,249.90 points.

It should be added that during the morning in Mexico the Balance of Payments for the second quarter was published. The current account balance registered a surplus of $ 5 million, while the capital account showed a deficit of $ 5 million. 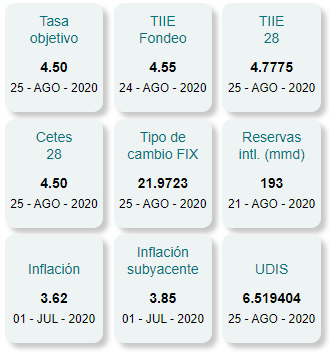 Finally, the errors and omissions line showed a positive flow of $ 5.894 million, which represents 2.2% of GDP.