The peso closed the session with a moderate appreciation of 0.14% or 2.8 cents, trading around 20.01 pesos per dollar, erasing most of the losses observed overnight.

The behavior of the weight during the day can be divided into two parts:

Overnight, the peso weakened against the dollar in line with most currencies, as a result of a correction to what was observed in recent sessions. The main catalyst for the market movements in the early hours of the session was that the UK government approved the use of the vaccine from pharmaceutical companies Pfizer and BioNTech. The reaction was not positive, because it had already been discounted by the market.

Subsequently, the dollar showed a change in trend, weakening against its main crosses, due to the continued expectation that the US Congress would approve a new round of fiscal stimulus.

The leader of the Democratic caucus in the House of Representatives, Nancy Pelosi, and the leader of the Democrats in the Senate, Chuck Schumer, indicated that their party approves the bipartisan proposal presented yesterday for 908 billion dollars and that it will serve as a basis for negotiating a broader stimulus with the Republicans.

In the foreign exchange market, the most appreciated currencies were from emerging economies or predominantly producers of raw materials, with the Colombian peso registering the highest appreciation of 1.13%, followed by the Russian ruble with 1.02% and the Chilean peso with 0.64 percent.

In the commodities market, oil prices closed with gains, with the WTI showing an advance of 1.55% to 45.24 dollars a barrel.

The currencies of advanced economies also registered gains, mainly the euro, which closed with an advance of 0.26% at 1.2102 dollars per euro and reached a maximum of 1.2114 dollars per euro, its highest level since April 30, 2018.

The capital markets also reacted to comments from Pelosi and Schumer, with major US indices erasing losses. The Dow Jones and S&P 500 indices closed with moderate gains of 0.20 and 0.18%, respectively, while the NASDAQ registered a moderate decline of 0.05%. For its part, in Mexico, the CPI of the Mexican Stock Exchange continued its upward trend, advancing 1.82%. 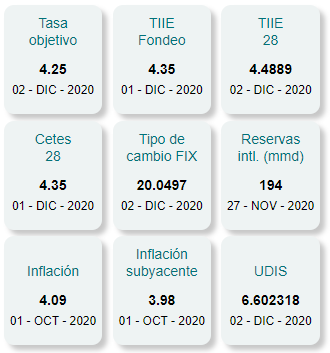