The peso closed the session with an appreciation of 0.47% or 9.4 cents, trading around 19.77 pesos per dollar, ranking 18 in a wide basket of currencies against the dollar.

In the session, only three currencies closed with a decline, the Argentine peso with 0.10%, the Peruvian sol with 0.04% and the Chinese yuan with 0.02 percent.

This was the result of a lower demand for dollars in the foreign exchange market, causing the weighted index of the currency to close with a 0.39% decline, accumulating a 1.09% decline so far this week.

The weakness of the dollar is a direct consequence of an increased appetite for risk in the global financial markets, since in the United States the Democratic and Republican legislators gave positive comments about already being in the last details to approve a stimulus package of 900 billion dollars. Dollars.

It is important to mention that optimism could only be short-term, as sources close to the negotiations revealed that no support for state and local governments was included.

A clear increase in optimism was observed in the capital markets, where the Dow Jones advanced 0.49%, while the S&P 500 and the Nasdaq gained 0.58 and 0.84% ​​respectively, reaching new record highs.

Also in Mexico, the IPC of the Mexican Stock Exchange registered a gain of 1.22 percent.

During the session, strong gains were observed for the commodity markets, with the WTI rising 1.22% and trading at 48.41 dollars per barrel, while, in industrial metals, the price of copper rose 1.07% and the price of aluminum 0.88 per barrel. hundred.

This is because, in the commodities market, optimism of a sustained economic recovery thanks to the availability of a vaccine against Covid19 and optimism for the probable approval of fiscal stimuli in the United States is combined.

In the foreign exchange market, the most appreciated currencies were the Chilean peso with 1.62% and the Norwegian krone with 1.25%, both currencies of countries that produce raw materials.

It should be remembered that, since the monetary policy meeting on November 12, the Central Bank has shown a cautious stance, after inflation was above 4% from August to October, exceeding the objective of 3% +/- 1%. With this, the nominal interest rate is the eighth highest rate globally, while the real rate is the tenth highest, standing at 0.92 percent.

Despite the fact that inflation decreased in November to stand at 3.33% year-on-year, most of the members of the governing board still show a neutral tone, as it is still anticipated to confirm the trajectory towards the target of 3 percent.

Much of the decline in prices during November was due to a longer duration of the “Good End” offers, so when the discounts are reversed, inflation could rebound during December. 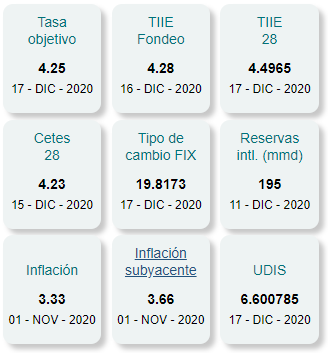 Grupo Financiero BASE anticipates that inflation at the end of 2020 will be close to 3.2% year-on-year.

If the downward trend in inflation is confirmed, it is likely that in February 2021 Banco de México will restart the cycle of cuts in the interest rate.