The peso closed the session with an appreciation of 1.29% or 29.2 cents, trading around 22.38 pesos per dollar, being the first advance of the peso since July 27 and ranking as the second highest-earning currency in the basket of main crosses.

In the session, the Global Risk Perception Base Indicator (PPI) was -265 units, which means high risk appetite. This happens since the components of commodities, currencies, money, capital and country risk showed consistent results with an appetite for risk, given the expectation that new fiscal stimuli will be approved in the United States in the coming days.

Part of the market optimism was also due to news of positive results in the development of a Covid19 vaccine by pharmaceutical company Novavax Inc.

It should be added that most currencies gained ground against the dollar. The euro appreciated 0.53%, hitting a high of $ 1.1905 per euro, close to its best in the year of 1.1909 reached at the end of July. Another currency that appreciated strongly was the Norwegian krone, which rose 1.74% to 8.9580 kroner per dollar, its best level since January.

The appreciation of the Norwegian krone is related to the strengthening of the prices of raw materials, mainly oil, with the WTI advancing 1.25% to $ 42.22 per barrel, while the Brent strengthened 1.87% to $ 45.26.

The peso and the dollar

In the commodities market, metals also posted strong gains. Gold closed the session trading at 2,040.97 dollars per ounce, which is equivalent to an increase in its price of 1.08%, reaching a new record of 2,055.79 dollars per ounce.

Market optimism allowed the main indices in the capital markets to gain ground in Europe and America. 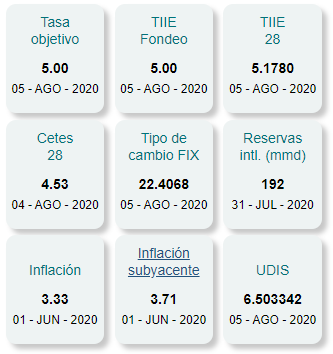