The peso begins September with an appreciation of 0.62% or 13.58 cents, trading around 21.75 pesos per dollar, touching a minimum of 21.7363 pesos, given an increase in risk appetite in global financial markets after the indicator was published in China Caixin Manufacturing PMI for August, which stood at 53.1 points, its highest level since January 2011.

As the foregoing is evidence that the economic recovery continued during August, mainly in manufacturing, a positive reaction was observed from financial markets at the global level, boosting the currencies of emerging economies.

For its part, the PMI for the Euro Zone stood at 51.7 points in August, slightly below the reading of 51.8 points in July.

In the interior, the recovery of the manufacturing sector continues, with strong increases in production and new orders.

However, the employment component shows a contraction for 16 consecutive months. The countries with the lowest readings in the PMI indicator were Spain (49.9 points) and France (49.8 points), evidence that some advanced economies could have difficulty continuing to recover.

Optimism continued to be observed in financial markets as in Germany, Chancellor Angela Merkel, reported that the hit of the pandemic could be less than previously anticipated.

According to German government estimates, her country’s GDP is expected to contract 5.8% in 2020, a downward adjustment from the 6.3% drop previously estimated.

The most appreciated currencies are the South African rand with an advance of 1.77%, the real with 0.88%, the pound sterling with 0.73% and the Mexican peso with 0.62 percent.

It should be added that the dollar weighted index shows a decline of 0.36%, hitting a new low for the year, a sign that the expectation of a broadly accommodative monetary policy in the United States continues to contribute to episodes of weakness for the US currency.

Most commodities enter the session with gains, derived from the general weakening of the US dollar.

For its part, copper is trading at $ 6,790 per metric ton, which is equivalent to an increase in its price of 1.43 percent.

In the capital market, the main indices in Europe start with moderate gains, with average gains close to 0.30 percent.

However, London’s FTSE 100 started the week with a 1.33% decline, after media revealed in yesterday’s session that the Treasury Ministry is analyzing increasing taxes to cover a part of the fiscal deficit generated by the pandemic.

In August, the recovery of business confidence came to a halt by registering monthly declines in all sectors, where the greatest fall was observed in the ICE of construction with 0.7 points to settle at 40.1 points, followed by manufacturing with 0.4 points, registering a level of 38.1 points, while trade decreased 0.3 points, reaching 41.5 points, according to seasonally adjusted figures.

Although there was a more favorable dynamics on the part of the manufacturing sector due to the external sector to the external sector, the prolongation of the limitations to production as the number of coronavirus infections remained high could have contributed to the deterioration of confidence in the sector. 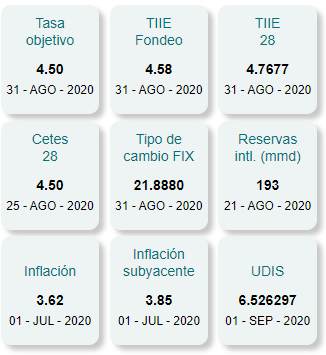 Likewise, the lack of a countercyclical fiscal policy generates mistrust in all sectors.

Later, the remittances to the month of July and the Banxico survey to private sector specialists will be announced, both at 9:00 a.m., while at 12:00 p.m. the IMEF PMI indicators will be published, for the manufacturing and non-manufacturing sector.

To hedge against a depreciation of the peso beyond 22.50 pesos per dollar, a purchase option (call), with an exercise date within 1 month has a premium of 1.13% and represents the right but not the obligation to buy dollars in the aforementioned level.