The peso closed the session with a moderate appreciation of 0.21% or 4.7 cents and trading around 22.34 pesos per dollar, after reaching a minimum of 22.1549 pesos during the session.

It should be noted that the peso erased its initial appreciation when it moved alongside the Brazilian real, which registered a depreciation of 0.54%, to close at 5.3427 reais per dollar, being the currency most depreciated in the basket of major crosses.

The rebound is due to the fact that there are no fundamental reasons for a sustained appreciation of the Mexican peso at the moment, as economic indicators point to a severe economic recession and the growth of the rate of new coronavirus infections reduces the probability of an accelerated economic recovery. .

Meanwhile, the return of the exchange rate to levels on Friday is also due to higher demand for early dollar purchases and coverage, after reaching the minimum of 22.15 pesos on the day.

The peso and market

Regarding economic indicators, this morning the private consumption indicator was published in Mexico, which registered a monthly drop of 19.68%, the largest on record since the series began in 1993.

The annual fall was 22.30%, being greater than the fall in consumption during the Great Recession of 2009, when it contracted 11.21%. The decrease in consumption is a direct result of the containment measures that forced the closure of businesses and the decrease in the transit of people, affecting the supply and demand for goods and services.

Within the indicator, the consumption of imported goods registered a severe annual fall of 30.64%, due to the fact that the effect of the depreciation of the peso is added.

On the other hand, the Gross Fixed Investment Indicator was published today, which during April showed a monthly drop of 28.93% and an annual drop of 37.1%, the highest on record, standing at a level of 66.81 points, not seen since January 1998

In Tuesday’s session, the automotive production and exports data will be published in Mexico, while at the global level, no relevant economic information will be published. For this reason, market attention is likely to focus on the rate of new coronavirus infections, mainly in the United States. 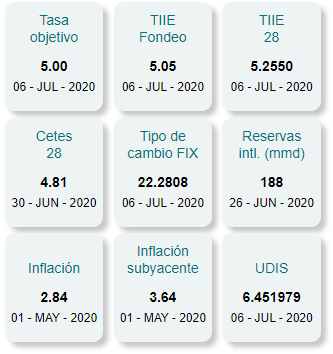